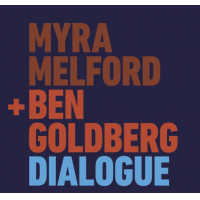 In their first duo release Dialogue avant-garde jazz pianist Myra Melford and clarinetist Ben Goldberg's two instruments move in tandem yet independently, complimenting one another while exhibiting distinct qualities. At the forefront of open-minded music, the two have worked together in other ensembles yet performed sporadically as a duo since 2008. A 2013 Guggenheim Fellow, Melford is a fearless improviser and bandleader of several groups with exceptional recordings The Whole Tree Gone (Firehouse 12, 2010) and Snowy Egret(Yellobird,2015). A consummate artist, Goldberg is equally prolific with a number of projects featuring seminal artists from Don Byron to John Zorn.

Their duo simpatico is evident in this set of improvised conversations which range from poignant themes ("An Unexpected Visitor"), inquisitive excursions ("Your Life Here") and free explorations ("The Kitchen"). With multiple ideas coalescing within each track there's never a dull moment; Melford's piano illuminate graceful fingerings and frenzied blurs while Goldberg interjects understated phrases and quick bursts of air. There's a wealth of goodness to be heard for listeners who appreciate players who have mastered their craft in both their technique and auditory complexities.

Melford's spaces between the notes in "Moonless Night" are felt as Goldberg makes his clarinet breathe with soft purrs filled with meaning. Bluesy rhapsodies are explored in "1 Through 8" and "Passing Phase" in contrast to the ethereal themed "Montevideo" and the pastoral setting of "Chorale" the recording's most picturesque pieces proving that these the two fine musicians do indeed think as one.