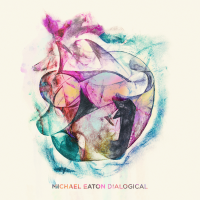 A saxophonist and composer with uncommon ambition, Michael Eaton seems to recognize no limits whatsoever on his craft. He's played in virtually every style imaginable: free improvisation, Latin jazz, post-bop, classical, reggae and rock, just to scratch the surface—and he keeps company with a cross-section of today's cutting-edge players, including James Brandon Lewis, Michael Attias and Jonathan Finlayson, all of whom appeared in a much-feted concert he put together with Adam Minkoff in 2015 to commemorate the fiftieth anniversary of John Coltrane's Ascension (Impulse, 1965). That was followed soon after by 'Til the End My Dear, a recording he and Minkoff coordinated of a number of works by Stravinsky, performed by a Frank Zappa-esque octet (Vaalbara Records, 2018). Although it's just his second release as a leader, Eaton's latest, Dialogical, continues his quest to cover as much ground as possible in his music.

The core of Eaton's group was previously featured on his 2015 debut, Individuation (Destiny Records), with pianist Brad Whiteley, bassist Daniel Ori and drummer Shareef Taher complementing Eaton to form an air-tight quartet capable of working through the many stylistic shifts that make up the music on Dialogical. Along the way they're augmented with top-shelf musicians like guitarist Lionel Loueke, vibraphonist Brittany Anjou and flutist Cheryl Pyle. Most of the music on Dialogical is intricately constructed. From the lengthy, Latin-influenced opener, "Juno," to the West-African feel of "Dialogical," the Mideast-tinged "Anthropocene," the Eastern-European vibe of "I and Thou" and, finally, the four-part minimalist suite "Temporalities," the album is a mélange of styles that threatens to pull apart from its centrifugal tendencies. But what ultimately saves it is the superb musicianship that is present in abundance.

Especially on the longer tracks, it is clear that this is a band that likes to dig into a groove. On "Juno," Loueke's expansive, effects-laden solo catalyzes similarly potent contributions from Eaton and Whiteley, as Ori and Taher sustain the momentum of the track with rhythmic vigor and flexibility, a vital requirement given the piece's changing time signatures. The rock-inflected mode that alternates with the fast-swinging segment on "Anthropocene" seems to launch Eaton into a particularly impassioned solo, while the Steve Coleman-influenced cyclical repetitions on "Aphoristic" set the stage for another excellent guitar exploration from Loueke. Although the pieces shift meters and styles frequently enough to make one's head spin, the group thrives on these transitions, and it brings the best out of the musicians as there's never a chance for things to become stagnant.

The album closes with the minimalist suite, "Temporalities." It's a substantial portion of the record, at around twenty minutes in length, and it's the album's most significant stylistic change-up. It's well-conceived and well-executed, making especially good use of Anjou's vibes and Pyle's flute, but its discontinuity with the rest of the album is noticeable. If there is a link to be found with the preceding tracks, one might argue that the kind of repetitions Eaton likes to use in his compositions—such as the loops employed so effectively on "Aphoristic"—aren't that far removed from the evolving patterns one finds in the work of Steve Reich. But even so, this is a group that trades heavily on its rhythmic adventurousness, making the steady, unyielding rhythmic character of the suite a rather jarring departure, its high musical caliber notwithstanding. It might have worked better as a standalone project.

Regardless of its limitations, there is more than enough promising music on Dialogical to justify Eaton's status as a force to be reckoned with in today's jazz world. One thing's certain, in any case: it's impossible to predict what he'll do next.