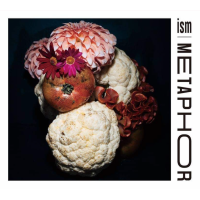 We are all becoming. Not "becoming" as in pretty or handsome, but, as in we are coming to be. You can relate this to the Dharma path, or maturity, maybe even the act of learning how to juggle. Becoming is also the theme of the trio سم [ISM]. Its follow up to Nature In Its Inscrutability Strikes Back (Umlaut Records, 2015) is aptly titled Metaphor.

Pianist Pat Thomas (About Group, Black Top, Evan Parker, Tony Oxley, bassist Joel Grip (Neuköllner Modelle, Pepping Tom, Je Suis!) and drummer Antonin Gerbal (Umlaut Big Band, Zoor, Bertrand Denzler duo) commit the act of becoming through the process of group improvisation. Their music is a kind of transformational hive-mind experience. It's not that they create something from nothing, more like the create something from, well, everything.

The two lengthy tracks just seemingly appear. Conjured from a lifetime of music making "Cockscomb" drops with Thomas applying heavy left hand percussive notes over the bowed strains of Grip's bass and the burbled chatter of Gerbal's drum kit. The piece flows, but not as a stream or river. Echoes of Keith Jarrett's approach are juxtaposed with that of Craig Taborn or Cecil Taylor. Solos are mostly nonexistent, maybe better described as fictional. Think of the Australian trio The Necks, if The Necks were struck with Attention Deficit Disorder. The sound would be a hodgepodge or musical salmagundi if it weren't for the adhesive quality of the trio. Both Grip and Gerbal are capable and accomplished improvisers. They both apply an attentive and vigilance here. The trio's cuts and slashes are orchestrated with ease. The second track "Marguerite" is a bit more accessible, if by accessible we are able to possibly transcribe the music. It swings, in the old school sense of the word and rocks your soul with an every increasing pulse, that by the terminus has exhausted itself. Tired, but a good kind of tired.