BY VICTOR L. SCHERMER
May 9, 2010
Sign in to view read count
Kimmel Center's Jazz Up Close Series, 2009-2010 Season
Back in Your Own Back Yard: Billie Holiday Tribute
Denise King and Venissa Santi
Philadelphia, Pennsylvania
May 1, 2010

This, the final concert in an eclectic series organized by Curator Danilo Pérez and linked by the goal of honoring the memory of the great Billie Holiday, featured two fine divas, each bringing her own style and musical agenda to bear on Holiday's signature songs and each succeeding in capturing not so much Lady Day's unique sound as the way she was able to convey emotions and moods. 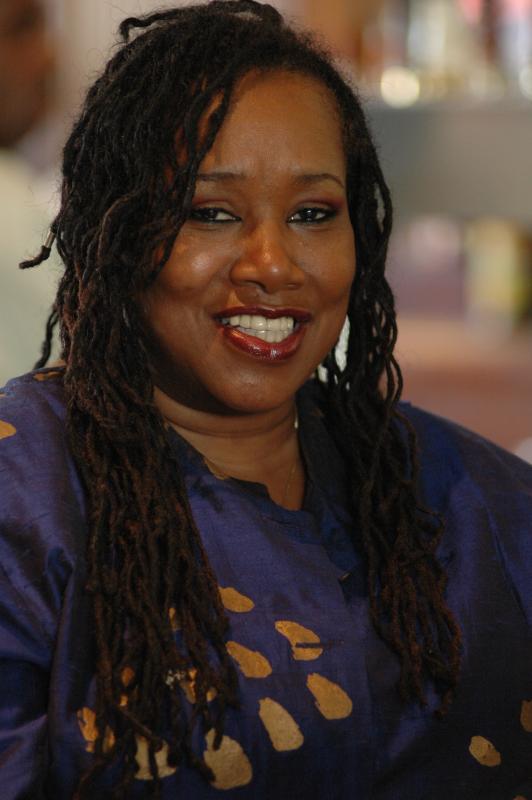 Denise King (pictured on left) is a seasoned jazz vocalist and a familiar figure in the Philadelphia area. Her performance took on added significance for the locals, since it was the last opportunity to hear her before she leaves the city for an indefinite time while performing in Europe. Venissa Santi, who opened for her, is a younger singer of considerable talent who has taken up residence in Philadelphia, recently releasing her first CD, Bienvenida (Sunnyside, 2008), a compilation of jazz derivatives from the perspective of her family's home country, Cuba. The contrast between the two was striking. Santi is forging a new Cuban jazz format, with an emphasis on rumba and other native rhythms. King brings with her the lively swinging tradition of Sarah Vaughan and Ella Fitzgerald, with a finesse and enthusiasm second to none.
----------------------------------------------------------------------------------- Venissa Santi: vocals with John Stenger: piano, Jason Fraticelli: bass, Francois Zayas: drums and arranger, Chris Aschman: trumpet, Josh Robiuson: percussion.

Santi came on with a straight-ahead version of a Billie Holiday favorite, the popular standard "What's New," accompanied only by pianist Robert Stenger, a working member of the group Ellipsis. In this ballad Santi immediately demonstrated her artful voice and mastery of Holiday's idiom while capturing the shifting moods of a lover encountering her "ex" and trying vainly to re-start the relationship. Judging from both her performance on the recording and this concert, Santi makes sophisticated use of vocal inflections to capture the introspection of a song, an ability she shares with her friend and mentor, Joanna Pascale, another of Philadelphia's great jazz vocalists. Following this meditative lyric, she brought on the entire band for her original, "Talkin' to You," representing the Cuban/jazz synthesis that is her unique contribution to the legacy, a lively concatenation of Cuban rhythms and dissonances—and a welcome contrast to both Brazilian bossa nova and popular "salsa" music while incorporating features of both.

By integrating the Cuban idiom with jazz, Santi has at a young age already earned herself a place in jazz history, developing an approach which requires great skill to execute, not to mention the ability to impart the strong, spicy elements that electrically charge up any song. Her music calls for very gifted sidemen, and while the instrumental crew, with the exception of drummer/arranger Francois Zayas, was not the same as the superlative support on her CD, they repeatedly proved their mettle, especially pianist Stenger and bassist Fraticelli. Stenger has a very controlled approach, while Fraticelli pulls out all the stops, creating a tension of opposites that served the Cuban tautness very well. Moreover, the arrangements by Zayas captured the essence of Santi's vocal approach, energetic but held back rhythmically in a way that conveys the tension of life, the pressures which the Cuban people know all too well and which also characterize the underpinnings of American jazz.

For the duration of her set, Santi stayed with Zayas' Cuban-based arrangements of Billie Holiday classics, coming on with "You're My Thrill" featuring Aschman on trumpet, a brilliant version of "Travelin' Light," and finally "That Old Devil Called Love," with a masterful piano solo by Stenger. "Involved Again," a song which, according to Santi, Holiday intended to record but never did, was touching. "I Cover the Waterfront" was evocative of the sensuality of pre-revolution Havana Harbor. "My Man" conveyed the false hope and resignation of Holiday's version; and the concluding number, "You Better Go Now," was done sweetly and gently, with a sensitive cornet solo by Aschman.

During the intermission chat that has become an integral part of "Jazz Up Close," DJ Maureen Malloy of WRTI asked some pointed questions of Santi and King, with King confessing that she's had better breaks in Europe than her home city of Philadelphia, and Santi acknowledging some of her difficulties becoming better known period, although she is getting a good deal of radio exposure these days. The life of a jazz artist is often fraught with obstacles, and it was refreshing to hear the honesty of both these divas, instead of the usual carefully crafted clichés.

As if to give a nod to Santi's Latin roots, Denise King's fabulous rhythm section with Adam Faulkner on piano, Lee Smith on bass, and Lucky Thompson (not to be confused with the late bebop saxophonist of the same name) on drums, began with an instrumental version of a Jobim standard. Then King dominated the evening with songs immediately recognizable as Billie Holiday perennials: "Lady Sings the Blues," "God Bless the Child," "All of Me," "Body and Soul," "Fine and Mellow," "Strange Fruit," "What a Little Moonlight Can Do," and "Good Morning Heartache." King and her sidemen are masters of the jazz idiom—from swing through bebop and hard bop—styles coinciding with Holiday's tenure. Although King swings more lightly and lithely than Holiday, who despite her excellent sense of timing was more renowned for her behind-the-beat phrasing, the group maintained the blues and gospel base of Holiday's singing, almost creating a likeness of the Basie band or one of Ella Fitzgerald's backup groups, with Faulkner giving a frequent nod to Tommy Flanagan, one of several outstanding Fitzgerald accompanists.

Driven by drummer Lucky Thompson, who many decades ago participated in the transition from swing percussion to bebop and hard bop, Faulkner and Smith improvised brilliantly. King rivals Ella Fitzgerald in her ability to interact with her musicians and get them moving, and one particular musical exchange of several choruses between herself and bassist Smith echoed "Ella and her fellas" in challenging the cutting edge of jive cleverness. King then became further engaged in the fun factor part of the evening, dancing around like those old-time blues singers with the Armstrong and Basie bands, and concluding with a rocking version of Joe Williams' trademark "Every Day I Have the Blues," with audience involvement such as this reviewer can't recall since times when the Louis Armstrong band had the crowd literally dancing in the aisles. Although the conservative Philadelphia audience didn't go quite that far, they became as enthusiastic as they could get, given that during the time of Satchmo, blue laws still put a lid on such extemporaneous eruptions in this town.

Like everything else in the universe, jazz obeys the laws of physics, transforming matter into energy. This concert generated two forms of jazz energy: Latin/Cuban and Basie-style swing at its rocking best. To conclude on a brief historical note, as a young singer on the cusp of stardom, Billie Holiday did a stint with the band of Count Basie, for whom she auditioned—in, of all places, Philadelphia.

Visit Denise King and Venissa Santi on the web.