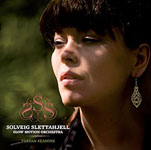 From a simple idea, great things can sometimes come. When Solveig Slettahjell formed Slow Motion Orchestra for a 2001 performance that became the 15-piece group's eponymous first recording on Norway's Curling Legs, the premise was simple: take a collection of songs from the Great American Songbook, and slow them down. Way down. But over the course of three albums and an eye-opening performance at Kristiansand's 2007 Punkt Festival, the Norwegian singer and her trimmed-down quintet proved that slow, powerful and dramatic need not be mutually exclusive terms.

The trimmed-down Slow Motion Quintet has since released four additional albums, most recently Domestic Songs (ACT, 2007), where SMQ continued a fundamental shift away from the cover material of its first three discs with greater emphasis on original songs by Slettahjell, keyboardist Morten Qvenild (In the Country, Susanna and The Magical Orchestra) and engineer/occasional co- producer Peder Kjellsby. Tarpan Seasons renames SMQ back into Slow Motion Orchestra, and for good reason. The quintet—intact since inception, with the exception of Jo Berger Myhre (Splashgirl) taking over the bass chair from Mats Eilertsen (Tord Gustavsen, Jacob Young)—is now a septet featuring newcomers Andreas Ulvo (Eple Trio, Mathias Eick Quartet) and Even Hermansen (Bushman's Revenge).

The addition of organ and guitar in no way affects Tarpan Seasons' appealing blend of the ethereal and the grounded. SMO still avoids anything resembling a fast clip, but it does thunder along more mightily in spots. Drummer Per Oddvar Johansen (The Source, Christian Wallumrød Ensemble) pushes the pulsing second half of "Your River" with some tribal toms, driving the first half of the same song with a gentle, balladic backbeat. Elsewhere he plays it soft and straight on the slightly off-kilter David Lynch-ian waltz of "December Song."

A key contributor to SMO's overall sound, hornist Sjur Miljeteig (Crimetime Orchestra, Hilde Marie Kjersem) is less plainly dominant in an expanded line-up that, other than Slettahjell's definitive voice, is more about collective sound rather than individuality. His layered horns create, along with Ulvo, Hermansen and and Qvenild, a lush backdrop for Slettahjell's velvety voice. As the primary songwriter, what gives her music its weight is a dynamic ebb and flow that, in lesser hands, would be handled with unnecessary bravado and melisma. Instead, Slettahjell impresses as much by what she doesn't sing as what she does. And on the brief, layered vocal feature of "You Go I Go," she proves as understated in the depth of her prose as she is her nuanced, ever- soulful delivery.

Departing from its jazzier roots into a kind of dreamy, subtly skewed pop music, Tarpan Seasons continues to work a concept that could be shtick, but in the hands of Slettahjell and Slow Motion Orchestra, has already proven its lasting value. With trace elements ranging from American roots music, singer/songwriters like Joni Mitchell and Tom Waits, and progressive pop fare like Sigur Rós—all refracted through a selfless Nordic prism—the warmly inviting but quirkily intriguing Tarpan Seasons is Slettahjell's most personal and fully realized album to date.

Precise Content; The Ballad of Jimmy Crawler; Your River; How They Shine; Right as Rain; December Song; Three Hearts in a Bowl; Into the Night; Visit; You Go I Go; Be Steady; A Day.