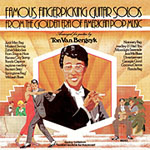 Ton Van Bergeyk is one of those artists who will forever toil in obscurity, known only amongst his fellow musicians as a true master—if he is recognized at all. Sadly, there isn't much demand for his style of music, and he will always be admired more for his complete mastery of finger-style guitar than for any of his musical contributions. Fortunately, Stefan Grossman has been reissuing hard-to-find gems, like this 1976 recording, on his Guitar Workshop label. With any luck, an audience will find Van Bergeyk's ample skills which, given the fact that they were largely ignored upon their release, deserve to be simply recognized rather than rediscovered.

Van Bergeyk, a byproduct of the fertile British folk guitar movement, has an appealing finger-style method that features a precise bass line and nimble counterpoint in the upper register. His playing has a bounce and joie de vivre to it that shows he has absorbed the feel of ragtime guitar and completely mastered the art of syncopation. Along with that, Van Bergeyk is the Fats Waller of the guitar, one who is able to take the most trivial of material and turn it into a musical gem.

The title of this Van Bergeyk record (one of two currently available) promises songs from the golden age of American pop music, but he may have a different definition of what the golden age is than most people, or at least has decided that there are some other songs he'd rather tackle than Gershwin and Porter. He pursues a selection of rags and novelty tunes (many transcribed from the original sheet music or the recordings of Fred Van Eps). All of them are wonderfully catchy and exuberant, from the spirited "Mustard Swing" and European stylings of "Zither Melodies," to the vaguely Carribean "Coconut Dance." All demonstrate the enthusiasm seen in Van Bergeyk's smile in the liner notes; this is a guy who plays music because he loves the expression it gives him.

Van Bergeyk makes the most finger-busting passages seem effortless, and if you doubt it, try playing the songs yourself. All but one are included in tablature as PDF files as part of the packages. If you're a guitarist, there's no doubt you'll want to give them a try. If you're merely a listener, you'll at least enjoy the guitar stylings of a guy who never really got his due.