By MIKE JURKOVIC
December 11, 2019
Sign in to view read count 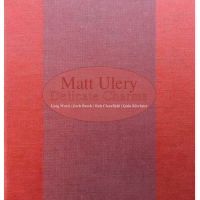 Coming on the heels of 2019's outstanding trio outing Wonderment (Woolgathering Records) with violinist Zach Brock and drummer John Deitemyer, Delicate Charms is a four and a half star recording if ever one was. And it begins with a classical air, an almost chambered hush into which rush those last minute arrivals, each their own player in the "Coping" suite that emblematically ushers in bassist Matt Ulery's particularly distinctive work. Equal parts Charles Mingus ("Taciturn"), Paul Chambers, (his sense of place within ensemble expands equatorially with each recording) and Debussy, (harmony as melody and vice versa), Ulery manifests all his best in "Coping," a thirteen minute sleigh ride of near epic proportions, and each player damn well knows it.

That's why that as much as the pulse popping "The Effortless Enchantment" or the lush and fanciful "Mellisonant" serve to define Ulery as one of his generation's best (all gratefulness from us other generations, Matt), the excitable "The Air We Breathe" and irascible "Taciturn" exemplify the magic and mastery of alto saxophonist Greg Ward, violinist Zack Brock, pianist Rob Clearfield (both of whom appear joined hip to hip with Ulery on Delicate Charms and previous adventures) and drummer Quin Kirchner when they're all locked in and high-balling it through.

So back to "Coping." A full road map through the bassist/composer's evolving theories of architecture and environment, Quin's muffled tympani-like punctuations ground Ulery, Brock, and Ward's slyly anticipatory, opening trio. A grace period of sorts before those above mentioned last minute arrivals arrive with Clearfield and Quin crashing in and "Coping" comes into itself like a cyclone. Stirring in its dynamic and detailed interplay, each player makes "Coping" his own. And that's not even taking into account the sumptuous fact that it leads into "The Effortless Enchantment," and that too is its own tsunami.

But it's not about the weather. Or is it? Delicate Charms is about the changes we weather as individuals and as a collective. As he reveals in the press notes, "Coping" was written during a time of family health concerns. "The Effortless Enchanment's" main theme, expressed gorgeously and imitably by Brock's colorful sense of reel and Ward's shimmering alto, was written for his parent's 40th anniversary. Updated from his 2009 release Themes and Scales (Woolgathering Records) "October" becomes an emotionally charged, tangled tango of blues and what? Bop? Post-bop? Neo-classical populism? Folk dance? Take your pick. It's all equal game as far as these guys are concerned.

Like swollen rivers after a hard rain, Delicate Charms takes you where it wants to go and not the other way around. With block percussive crashes from Clearfield, Brock's sure, Celtic abandon and Ward's gregarious flight pattern, "The Air We Breathe" revels in the tease: Here one moment and there the next like a bee on a wet lily. "Taciturn" is anything but. Its tides roll in then recede with a Mingus-like impishness that takes the band from one high water mark to the next. Ditto "Nerve." Ditto Delicate Charms.