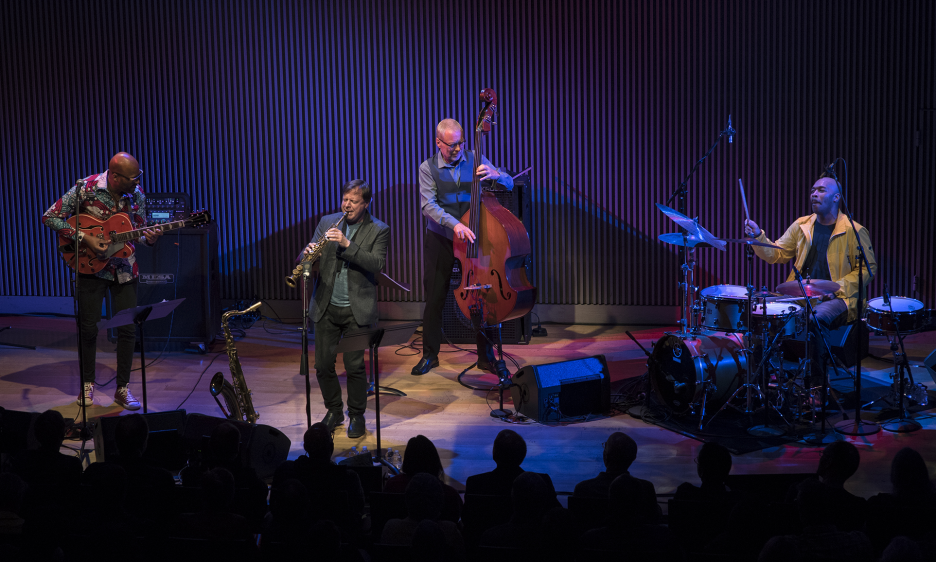 Dave Holland took the stage with a smile, an appropriate beginning to a four-night residency at SFJAZZ in San Francisco, California, one which would see him transition from solo to duo to trio to quartet.

Holland has created innumerable albums and CDs, including his solo bass recordings Emerald Tears (ECM, 1977) Ones All (ECM, 1993) and Life Cycle (Intuition Music, 1982), a solo cello recording. Holland started young. He practiced on a ukulele at age four, then moved on to the guitar at age ten and then transitioned to the bass at age 13. He was around 15 when a fortuitous discovery of the recordings of bassist Ray Brown led him to a passion for jazz. In July of 1968, aged 22, illustrious late trumpeter Miles Davis heard him in London and invited him to join his quintet. Adopting the mantra of late saxophonist Sam Rivers, whom Holland had toured with, he has striven to "Don't leave anything out, use it all," while performing with a wide variety of cutting edge musicians and ensembles, including Circle, Pat Metheny's Parallel Realities and Gateway.

The first night, Thursday, it was just Holland and his bass in front of an attentive and appreciative audience. The seats in front had been removed, creating a more intimate environment, and colored spotlights cast blue, red, green and dark shadows over the veteran bassist. Wearing a green shirt and dark trousers, Holland told the audience that it's been "quite a journey. Some of my good friends are coming to join me the next nights."

With that, he picked up his bass and began "Homecoming," "a tune," that "I like to start with." Unlike other compositions, which take years to hone, this one "dropped out of the sky." The sprightly number led to "Yesterdays," a 1933 jazz classic penned by Jerome Kern. Holland went on to play an unnamed tune he had learned from the late trumpeter Don Cherry as well as such classics as "Nardis," "Softly As In A Morning Sunrise" and "Round Midnight," and his own tunes—"Hooveling," Jumpin' In" and "Veil Of Tears." All were rendered with grace and fluidly. A well deserved standing ovation brought him back for a meditative version of "I'll Be Seeing You," Sammy Fain's 1938 tune, which has become a jazz standard.

The next evening offered a duet between Holland and longstanding collaborator Kenny Barron. The portly, shaven headed Barron, who wore a white shirt and suit, took the stage. Holland, across from him, wore a gray jacket, green shirt and black pants. While they have played together for more than three decades now, the two first recorded together on Scratch (Enja, 1985), a Barron's trio session. An instant classic, The Art of Conversation (Impulse!, 2014), a duo date, was awarded Record of the Year (for 2014) by the Jazz Journalists Association.

Together they launched into "Spirals," with Barron lush, lucid and lyrical on the 88s as he played his intricate and delicate composition. Charlie Parker's "Segment" followed. It featured a charming bit of interplay as the musicians riffed off each other. The poignant "Waltz for K.W.," dedicated to the late trumpeter Kenny Wheeler, was followed by Barron's sprightly, up tempo "Seascape." Then it was time for Holland's meditative "In Your Arms." Next, "Bemsha Swing" featured a lovely bass solo.

Introducing the charming and melodic "Rain," the evening's last number, Holland explained that he had been invited to a week-long residency by the Rockefeller Foundation's Potantico Center in Tarrytown, New York. All of his needs were taken care of. All he had to do was write a composition and perform it at the week's end. The result was "Rain."

"Pass It On," a Holland composition, is dedicated to the late jazz drummer Ed Blackwell whom Holland called "a great teacher;" it began with an extended bass solo. A standing ovation brought them back for a rousing version of "Blue Monk."

Next night, Holland introduced two "great friends." Drummer Obed Calvaire, a member of the SFJAZZ Collective, is of Haitian descent and a Miami native. Guitarist Kevin Eubanks was the leader of the Tonight Show Band and has played with a large number of artists, including the late Sam Rivers. Together they launched into Eubank's "The Dancing Sea," a moody soundscape. Calvaire hit his sticks hard while Eubanks leaned back against one of the auditorium's special high chairs for support while pulling notes from his Abe Rivera guitar. Then, Calvaire, his braided hair secured behind his head, drummed rapid fire to conjure up a sonic ice storm.

They then continued with "The Village," "Passing Time," "Quiet Fire" and "Seven Rings." While Eubanks demonstrated his technical prowess, producing tones ranging from the loud to the subtle. There were bass solos from Holland, as well as mallet work from Calvaire which was accompanied by quieter phrasing from Eubanks. Somewhat unusually, neither show's tunes overlapped; there were no encores, but each offed an abundant ninety minutes of sound. Eubanks pulled notes rapid fire, bouncing exotic riffs off of Calvaire, who showed subtlety on mallets as well as take-no-prisoners drumming. In his solos and ensemble playing, Holland skillfully worked with his band members to unlock a cornucopia of sound and emotion.

The fourth and final evening featured Holland with three formidable partners: guitarist extraordinaire Lionel Loueke, renowned saxophonist Chris Potter and drummer Eric Harland, a longtime member of the SFJAZZ Collective. Together they form the Aziza Quartet, a name taken from a mythological Beninese race of hairy little people who reside in anthills and in ceiba (kapok, silk cotton) trees. They offer good magic for hunters and are said to have introduced humans to fire. (Curiously, the kapok tree was revered by the ancient Maya as a symbol of the universe.)

Leading off with Loueke's "Aziza Dance," the ensemble offered a fiery, imaginative, expressive and dynamic set lasting nearly two hours. The extended tunes pretty much ran into each other. High moments were numerous. Switching between tenor and soprano, Potter offered robust solos on numbers such as his composition "Blue Sufi." At one point, Potter held to the back, moistening his reed, as Harland held with a grunt-laced expressive solo. Potter and Holland also dueted. Accomplished guitarist Loueke played in soft, almost ghostlike tones while singing softly; Harland accompanied him on mallets. He later sang while Potter soloed. Holland presented a gorgeous bass solo. A moody theme turned high powered, Harland turning fast and furious on the sticks as Potter launched into a propulsive and prodigious solo. All of this culminated in Loueke's funk-laced "Sleepless" before rousing standing applause brought them back for Potter's lyrical "Summer 15." Hands slung over fellow band members' shoulders and yet more enthused applause brought the evening to a conclusion.