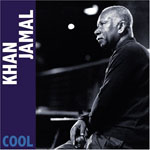 Always interesting and quite different from one to the next, vibraphonist Khan Jamal's recordings have charted a unique course through the world of improvisational music, from trio recordings with bass and drums or guitar and drums to sessions with great horn players (eg. Grachan Moncur III, Byard Lancaster, Charles Tyler, et. al.) to the somewhat psychedelic (1972's Drum Dance To The Motherland). Cool, self-released minimally by Jamal in 2002, is no exception.

Originally recorded in 1989, the quartet of vibes, cello, bass and drums grooves with ferocity. John Rodgers' cello playing is the wildcard, taking on different roles throughout: doubling the bass an octave up or the vibes on a melody, playing counterpoint against bass and vibes or soloing in a manner unique for a cellist. Drummer Dwight James, a Jamal collaborator for many years, drives this record with persistence, making a tune like "Rhythm Thang" a dare to stay still. Jamal's style of improvisation does not come from either a Milt Jackson/Bobby Hutcherson melodic approach or Gary Burton's chord-heavy sequences. Instead he uses the instrument much like Cecil Taylor's 88-tuned drums method. Indeed Jamal's solo on the aforementioned "Rhythm Thang" is reminiscent of Taylor, as well as providing a good example of the vibraphonist's occasional Monk-like style of composition: taking a simple dissonant riff and repeating it, mantra-like, with the deep conviction that conjures a jazz trance.

"A Dansk Morn," a striking piece, features a plaintive cello melody and shimmering cymbals played with mallets while bassist Warren Ore modestly keeps the slowly moving beat. "Six Plus Seven" refers to the amount of notes in the melodic lines that the vibes, bass and cello play in unison before the band launches into an unrelenting free jazz blowout. Which brings up the point that there are seven compositions on this wonderful CD and yet the total time is less than 40 minutes, the concise quality of each performance only augmenting their attractiveness.