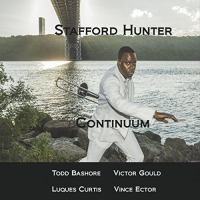 Stafford Hunter is known as a trombonist who grew out of the modern paradigm set by Steve Turre. He also shares a unique quality with Turre, in that he is an expert player of conch shells in the jazz idiom, joining him in the ensemble, Steve Turre and Sanctified Shells.

While this tie with Turre is a logical conclusion, the dots don't quite connect in terms of playing trombone in jazz. While his association with the Duke Ellington Orchestra may as well draw a specific assumption about his stylistic choices, Hunter is in fact, a modernist in the truest sense of the word. With his fourth release as a leader, Continuum, he probes the ins and outs of his diverse musical resume with a top-shelf New York- based quintet.

Hunter can more aptly be compared to Robin Eubanks, or even the great hard bop master, Curtis Fuller in a truer sense than the aforementioned Turre. Comparisons aside, Hunter's diverse discography and touring history which includes the Ellington Band, along with Orrin Evans, Roy Hargrove, Tony Bennett, Lauryn Hill, and Lester Bowie, states clearly not only his versatility but his consistent standard of excellence.

The company Hunter keeps on Continuum alludes to this standard, including bassist Luques Curtis, who is currently on the forefront of the modern jazz scene. Curtis has a unique way of bridging the scene stylistically between worlds inhabited by prominent stars such as Evans and the great Eddie Palmieri.

Hunter engages pure hard bop language on "Outside Looking In." The mercurial trombonist's excellent choice of mates is highlighted clearly on this piece. Largely unheralded alto saxophonist Todd Bashore eases into his solo before engaging blatant intensity in a fluid, melodic sense. Hunter himself demonstrates a rare tonality and a trumpet-like approach to articulation, while pianist Victor Gould offers a rollicking solo that echoes sentiments one might attach to the late, great Kenny Kirkland. Add the free-spirited polyrhythmic sensibility from drummer Vince Ector, and this superb quintet is personified in a flying under the radar sort of way. These are musicians worth researching and engaging on other recordings, as well as in live on the scene in New York and on tour.

On "Lament," Hunter eases things up a bit, playing with a romantic quality rarely heard on the trombone. While he is a trombone modernist in a pure sense, his interpretation here is reminiscent of the Ellington saxophone tradition set forth by Paul Gonsalves, or by classic tenor players such as Ben Webster. Hunter is a master of utilizing classic elements of the entire jazz tradition in his work. Somehow he weaves those elements into a sound that is distinct and clearly his own.

Creating music on conch shells as a legitimate musical instrument may seem far-fetched to some listeners unaware of the work of Stafford, or his mentor Turre. The very mention of them conjures images of some kind of new age, meditative ambiance. Essentially, Hunter utilizes shells in the same way he applies trombone to the jazz tradition. On "A Walk In Bari," he plays both with equal virtuosity, offering a probing, inventive trombone solo, counterpointed by his amazing foray into soloing on shells within the driving rhythmic efficiency of bassist Curtis, and drummer Ector.

John Coltrane's "Giant Steps" begins with a vamp that leads into a half tempo approach when compared to the classic original. Eschewing the rapid-fire approach of the master Coltrane, Hunter approaches the shifting, augmented chord changes to express the piece in a deeply romantic fashion one would not associate with the tune. It is a fearless way to take a different look at one of the classic masterpieces of the jazz language.

The trombone certainly has taken a back seat to the trumpet and saxophone in the bop and post-bop lineage of jazz. One might equate that to the undeniable limitations of the instrument. Even trombone trailblazers such as Julian Priester acknowledge those musical checkpoints. Priester learned at an early age that to receive equal opportunity on the bandstand as a trombonist, he had to simply beat the saxophonist or trumpeter to the microphone. Yes, the physical instrument has its shortcomings, yet in the case of Hunter, or his historic mentors such as Priester, the musician does not. Musical interpretive genius is the unyielding and overriding factor. On Continuum, Hunter states this clearly, emphatically. It serves as a calling card to modern trombone playing, and to the musician himself.

Continuum; Outside Looking In; lament; Giant Steps; A Walk In Bari; Ector's Vector; New Beginning; Line In The Sand.