BY EYAL HAREUVENI
November 16, 2013
Sign in to view read count 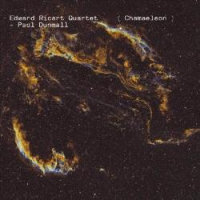 Chamaeleon, a rare document of Dunmall with American improvisers, is rooted firmly in the free jazz legacy of the Sixties. Muscular, intense and slow-cooking building of a colossal wall of sounds, driven by an hyperactive rhythm section, as performed on the 22-minutes "Forager" or the explosive "Excavator" and "Beelining." There are occasional, surprising bursts of lyricism, mainly by Dunmall and Robertson as on the first part of "Elliptic Operators," but the level of dense and intense dynamics are kept throughout this recording.

Dunmall finds immediately a common language with Robertson and the front-line of the two sound as two close friends conversing in their own nuanced and inventive language. Ricart, on his part, expands the sonic envelope with his genre-defying solo and its effects, reaching abstract, psychedelic sounds at the code of "Forager" and fiery, brutal eruption on his solo on "Elliptic Operators," while Ajemian and Barker, on their parts, vary and color the pulse constantly, keeping Dunmall, Robertson and Ricart on their toes.

Ricart is a powerful leader and guitarist. On Chamaeleon he navigates a stellar cast of improvisers, with a natural confidence and authority.