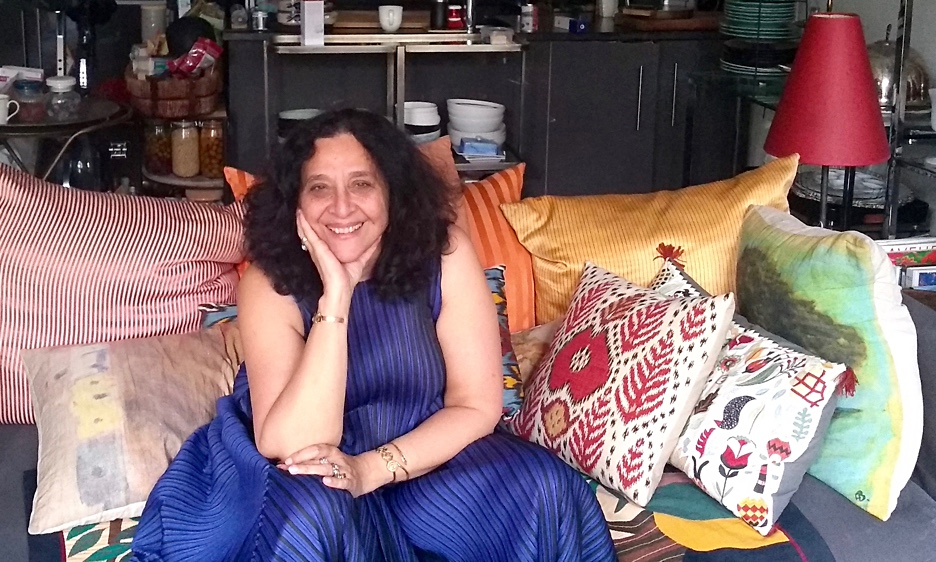 By ALEXANDER DURIE
May 1, 2019
Sign in to view read count

Jazz is political in its essence because it is the voice of the voiceless... &#151Catherine Farhi

What do an iconic Paris jazz club, the Arabic language and the Egyptian Surrealist movement have in common?

The answer sat in a Montmartre flat in the heights of Paris, surrounded by plants and books and wearing a long royal blue spring dress. Catherine Farhi is all these things at once, and more.

As her passions are as eclectic as her background, the task to open up about her identity and lifework was as complicated as describing jazz to a deaf person. But, as Farhi noted, "these are questions you must ask yourself." She reflected: "I've been looking for who I am for quite a long time."

At once the general manager of the New Morning, the legendary Paris jazz venue created in 1981 by her elder half-brothers that was taken over by her mother and later herself, Farhi is also an Arabic teacher who continues to split her time between her Egyptian homeland and France.

In a two-hour-long chat in her sunstruck living room, Farhi discussed the feeling of exile, and how she found a sense of home in her family tradition between the worlds of music, literature and her Arabic roots.

Farhi laughed at her unexpected journey and said: "I'm like a flower that's been cut up from a tree and replanted here, and I did my best."

"I came to France as a political refugee from Egypt with my father in the sixties. I was a little girl at the time." Farhi spoke vividly of her childhood and the literary background she grew up in, specifically under her journalist father Ibrahim Farhi. "He had a strong writing talent, and he had it in two languages. The symphony of his mind was French and Arabic," Farhi declared.

Her mother, meanwhile, was in the world of music and jazz. At Farhi's apartment, photos of her now-97-year-old mother rest in the living room, wearing a grandiose smile and a fur coat. While a quick Google search will provide you with younger photos of Eglal Farhi with all the legends of jazz who regularly played at the New Morning, from Chet Baker and Art Blakey to Manu Di Bango and Prince.

"The New Morning came because of a tradition of subversion that we had in the family. My father was part of the Egyptian Surrealist movement and was best friends with the creator of the surrealist movement, George Henein," Catherine answered as to how an Egyptian family of political refugees came to establish a major European jazz venue. "My brothers were like hippies and went into music because they felt it was a permanent revolution," Farhi said.

After her two erratic elder half-brothers brought the New Morning jazz club to Paris following its inception in Geneva, Switzerland (where their birth mother was from), it was Catherine's mother Eglal Farhi who took over and stayed at the helm for the majority of her life. "The crazy idea of my brothers was saved by my mother [from bankruptcy] in a very wise way," Farhi recalled.

Eglal Farhi only stopped running the New Morning in 2003 when she was becoming too old to maintain the energy of working at a jazz club. She called her daughter Catherine to help her, who was at the time a Cultural Attaché for the French Embassy in Egypt.

Farhi was at first reluctant to join her family business at the New Morning and return to France, where she couldn't find the same community spirit that she found in the Arab world. "When you're exiled you're a nobody," Farhi confessed. "We had such a joyous house in Egypt, and when you arrive in France you don't have that community."

But when Farhi returned to Paris, she found a home in the mix of occupations she did and people she knew. When she took over the New Morning in 2003, she also became a full-time Arabic teacher at the prestigious university Sciences Po, and three years later helped found its campus for the Middle Eastern region in Menton, in the South of France.

Being both a full-time teacher and manager of one of Paris's most vibrant jazz clubs was "very difficult" at first, Catherine admitted. But as it combined her two lifelong passions, it was a lifestyle she was ready to engage in.

"When I was young I told myself: 'choose something you will have your whole life,' and that was Arabic," Farhi said on the tradition of language and writing she inherited from her father. While the more she entered her mother's musical sphere, the more she discovered new realms that words couldn't fathom. "Only one thing transcends borders, and that's music," Farhi affirmed.

If that saying was true for music in general, it was even more so for jazz. "Jazz is political in its essence because it is the voice of the voiceless," Farhi explained, "it is an irrepressible voice that nobody could throw away." That energy of bringing people and influences from different backgrounds, from jazz and hip-hop to soul and funk, was precisely what Farhi aspired to achieve as she took over her mother's reign at the New Morning.

And it wasn't only on the managerial side that family endured at the New Morning, it was also through the artists, as Farhi recounted stories of Bebel Gilberto (daughter of João and Astrud Gilberto) and Ravi Coltrane (son of John and Alice Coltrane) playing at the New Morning years after their parents had.

These days, Farhi continues to split her time between Egypt and France and between running a jazz club and being an Arabic teacher, yet all these apparent contradictions somehow fuse together at the New Morning. Located on Rue des Petites Écuries in the 10th arrondissement, a neighbourhood with a lively immigrant population, Farhi recounted how her journey to work made her discover the community spirit she longed for: "I speak Arabic on the whole street, at the Syrian bar, the Algerian bistrot, the Lebanese restaurant, the Turkish sandwich-place..."

After many years seeking answers to her own identity and exploring her roots, it seems that Farhi and her family found a sense of home between the worlds of language and jazz on Rue des Petites Écuries. "After the New Morning existed, everybody knew where to find us. All our friends from Syria, Turkey, the States would know where to go to find my mum when they came to Paris," Farhi recalled. And, with a feeling of comfort, she affirmed: "New Morning gave us a country. Everybody knows where to find us now."