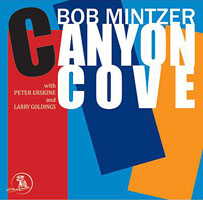 Between a bevy of sideman dates, longstanding gigs with Yellowjackets and his own big band, and periodic small ensemble recordings like the unassuming and heartfelt In the Moment (Art of Life, 2007), Bob Mintzer has remained one of the busiest woodwind multi-instrumentalists in jazz for nearly four decades, since first cutting his teeth as youngster with drum legend/mentor Buddy Rich. Largely focusing on the rich bebop tradition and its various offshoots, Mintzer has always managed to remain relevant by placing himself into a multiplicity of contexts. Mintzer visits the organ trio tradition on Canyon Cove, with a set of largely original material alongside one reworked standard and three free improvisations.

It's hard for Mintzer to miss with this trio of equally players. He's worked with drummer Peter Erskine countless times over the years, from bassist Jaco Pastorius' Word of Mouth big band to pianist Don Grolnick's overlooked mini-classsic, Weaver of Dreams (Blue Note, 1990) and the all- star Hudson Project (Concord, 2000). Mintzer's relationship with organist Larry Goldings is more recent; Canyon Cove was, in fact, originally intended for another organ great, Joey DeFrancesco. But Goldings is far more than just a sub: with artists ranging from guitarist John Scofield and saxophonist Michael Brecker to piano icon Herbie Hancock— the in-demand keyboardist has traveled the full range of the jazz spectrum and beyond.

All three players have more than enough cred in a range of tradition-centric projects to give Canyon Cove the same ring of truth of Mintzer's piano trio-driven In the Moment, though this time the reedman also includes three spontaneous, numbered improvisations, with guest Judd Miller on EWI, an electronic, wind-driven instrument that triggers sampled sounds and synthesized textures. "Improv #3" runs at a fast clip, with Erskine's delicate ride cymbal driving the pulse, while the drummer's lithe brushwork propels the equally swinging "#2" and those same brushes give the set-closing "#3" its gently funky pulse. All three tracks feel preconceived, despite their in-the-moment nature, and feature Mintzer on bass clarinet, an instrument that he's made definitive in his work over the years.

It's when Mintzer breaks out the longer horn on improvised sections—and on structured material like the ambling but ever-so-slightly outré "Road Well Traveled," and incendiary blues, "Bebop Special" (doubling the latter's head on flute)—that Canyon Cove truly transcends the norm. That said, his tenor work remains impressive on the more modernistic bent of "Somewhere Up There," Latin- esque "Papa Lips" and greasy funk of "Bugaloo to You."

There's even a nod to progressive rockers Emerson, Lake & Palmer on the energetic title track, though Goldings can't help but imbue the music, driven by Erskine's rockier pulse, with considerably more taste and far less excess than Keith Emerson, even at his most understated. It's evidence that even the most committed jazzers listen to music beyond its broadest purview. Still, Canyon Cove is, for the most part, a centrist affair that, like Mintzer's last small group disc, is an honest, unassuming and, consequently, thoroughly enjoyable affair.