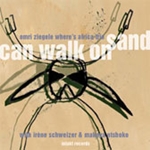 This could almost be a band "on a hiding to nothing" considering it self-consciously mines the seam of vibrant music first tapped by the likes of Chris McGregor and Harry Miller. Given the fact that it's only a trio, it's inevitable perhaps that the group lacks the sheer sonic impact of McGregor's much larger bands, but even by comparison with Miller's group Isipingo, which was usually a sextet, the music this band produces is wanting in depth and fire.

It's sometimes down to brevity for why this is so. The reading of Dollar Brand's "Tyntiana" runs less than four minutes and the music simply doesn't catch fire because the player's seem stymied by the piece itself, as if the improvisational fire simply doesn't catch.

It's also sad to note that the absence of a bassist is really felt, especially on Oliver Nelson's boppish "Butch & Butch" where Schweizer and Ntshoko, even while they manage to mark the one minute and twenty three seconds of its passing with some fervor, simply don't do the same in terms of killing the impression of the reading as merely perfunctory.

McGregor's "Andromeda" has been lifted to stellar heights on record by both the composer's Brotherhood of Breath and the Dedication Orchestra and while those readings were the antithesis of the perfunctory, the lasting impression here is of a casual warm-up for all of Ziegele's impassioned rhetoric.

A different frame of reference applies to the leader's entirely solo reading of "Summertime" and it serves to indicate how there should perhaps be a moratorium declared on recording the Gershwin composition. Ziegele's vocalizing is best ignored but because it's an integral part of the reading it has the effect of making his fractious lines seem even more disingenuous. Overall, it's unlikely to replace the memory of Sidney Bechet's reading of the piece.

There's a nice pitch to Johnny Dyani's "Ithi Gqi" where the trio is rounded out by the addition of Jurg Wickihalder on soprano sax, who even while he hews pretty close to the Steve Lacy model indicates also how the majority of the music here is best served by larger ensembles. The unison horns nail the exuberant line very nicely, and while Schweizer's drive is different to that of, say, McGregor, she turns in one of her most telling solos of the whole program.