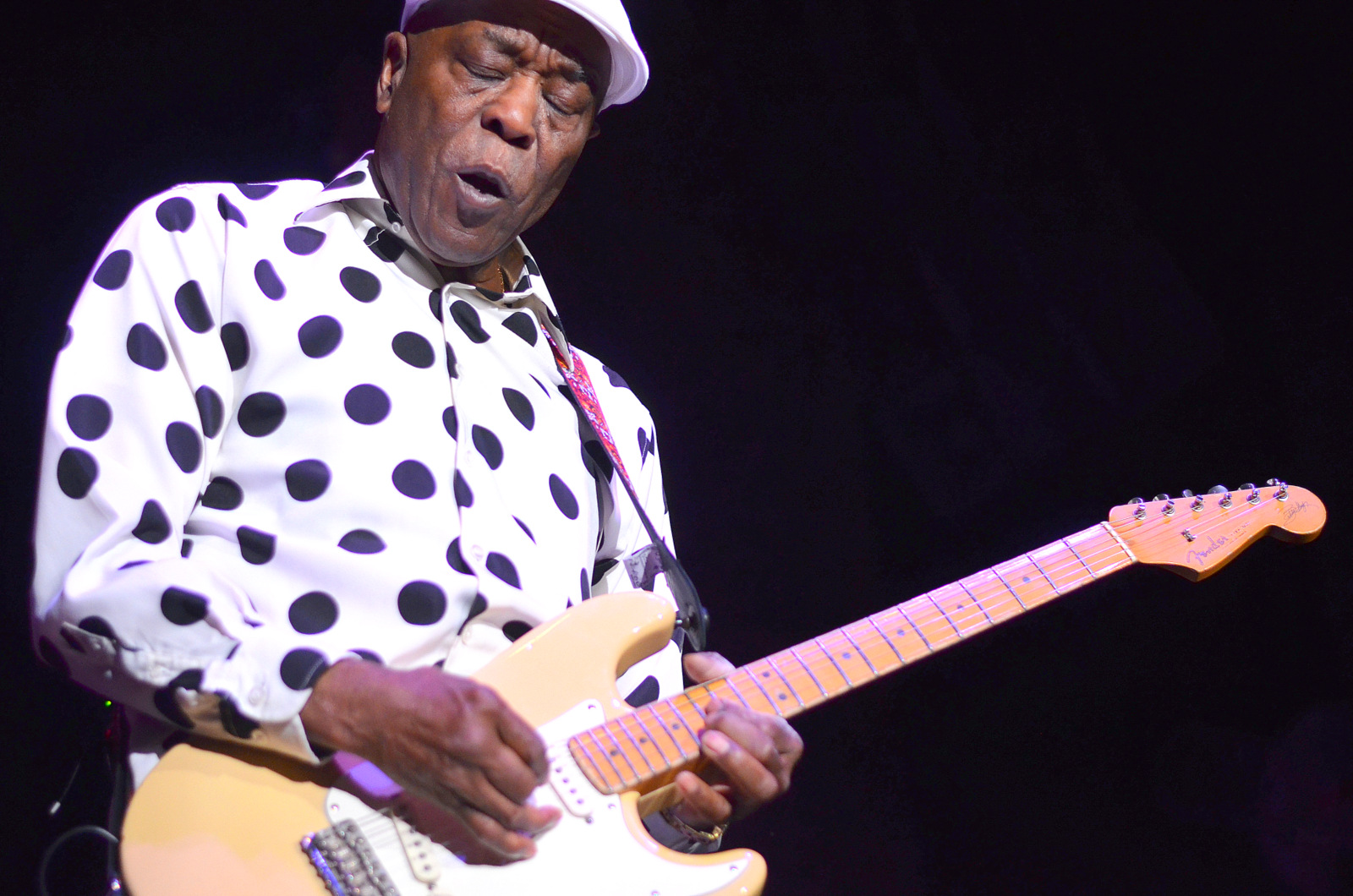 After a raucous round of applause, Guy came out front and center and stated, "I'll play you guys something so funky you can smell it and it goes like this." He and his band (Ric Hall on guitar, Orlando Wright on bass, Tim Austin on drums and band leader Marty Sammon on keyboards) dove into "Five Long Years." Segueing into "74 Years Young" from Living Proof (Silvertone/Jive Records, 2010), Guy made it a point to tell the crowd that the song "was written three years ago. I'm 77 now." He then performed the song with a sly grin on his face substituting 77 for 74. The lyrics are brilliant and autobiographical:

"I'm 77 years young, there ain't nothing I haven't done
I've been a dog and I've been a tomcat
I chased some tails and I left some tracks
I still know how to have my fun 'cause I'm 77 years young"
Commanding the stage is second nature to the jovial blues guitarist. Connecting with the crowd as only he can do, from the minute he hit the stage, Guy told stories in a conversational manner. His scorching guitar, sweet vocals and unparalleled stage presence are second-to-none. This was especially evident as the audience members hung on the edges of their seats as he played "I'm A King Bee"(which came to a hard stop and then delivered an amazing reading of "I Just Want To Make Love To You."

Guy then paid tribute to his influences, contemporaries and friends by playing snippets of John Lee Hooker's "Boom, Boom," Jimmy Reed's "Down The Road" and Guitar Slim's "The Things I Used to Do." It was at this point that a stool was brought out on stage. Guy was handed an acoustic guitar with an electric pick-up and sitting center stage, he delivered a stunning version of Ray Charles' "What'd I Say." He then told a story about a club owner who doubted his musical prowess. The man kept on feeding the jukebox telling Guy, "If you can play this, you can play here." Guy explained that the owner repeated the exercise a number of times and to illustrate the story the guitarist played Marvin Gaye's "Ain't It Peculiar," "Strange Brew" and a number of other classics.

Coming back to the center of the stage, Guy told another story. This one about a conversation he had with his late mother. He recounted that he was looking into a mirror one day and said, "Mama I'm good looking. She said, 'yes you are, but looks are only skin deep.'" He then played a stunning version of the ballad of the same name.

It was at this time that Guy announced that he had a special guest that he wanted to bring on stage. Guitarist Scott Holt then bounded out and jammed with Guy and the band on "Slippin' In." When the song ended, the appreciative audience showed its love with a standing ovation.

Holt remained on stage to share call-and-response dueling leads with Guy on "Hoodoo Man Blues," an instrumental version of Cream's "Sunshine of Your Love" and the show's closer, an instrumental arrangement of "Messin' With The Kid." The beauty of this passage with the fact that the two guitarists not only complimented each other with tasty and clean riffs, but proved that less is indeed more and both men allowed their guitars to do the talking. When the lights came up, the audience filed out of the performance space and crowded the merchandise booth clamoring to purchase CDs, signed albums, signed guitar straps, posters and T-shirts.