New Orleans bluesman Guitar Slim (Eddie Jones) exerted an enormous influence on many modern guitarists to follow. A brilliant and underrated guitarist, Slim was also the consummate showman. He dyed his hair to match the color of his suits and used a 100-foot+ guitar cord to wander off stage into the parking lot during gigs. He lived in the fast lane and he played loudly! His 1954 hit, “ThingsThat I Used to Do,” is a timeless and important blues classic, reached the top of the R&B charts. It featured another blues legend, Ray Charles who arranged the gospel-tinged track and played piano.

Guitar Slim was born Eddie Jones in Greenwood, Mississippi on December 10, 1926. When he was five years old his mother died, and having never known his father, he was sent to Hollandale to be raised by his grandmother on the L. C. Haves plantation. Living there, he learned to make a living working in the cotton fields and plowing behind a mule.

At a young age, Eddie would spend his free time at the local juke joints in Hollandale. He began to sit in with traveling and local bands as a singer and dancer. In fact, his adept skills as a dancer earned him the nickname "Limber Legs." At the age of 18, he was working with a band fronted by Willie Warren. Bandleader Willie Warren was acknowledged as introducing Jones to the guitar. He found further influence from the Delta slide legend Robert Nighthawk, who occasionally traveled through Hollandale. Despite the wealth of Blues guitarists in Mississippi, Jones gained his true love for the instrument from the sounds he heard coming out of Texas, in particular, T-Bone Walker and Clarence "Gatemouth" Brown. And it would be Gatemouth's "Boogie Rambler" that he would use as his theme song for several years.

By 1950, Eddie Jones had already developed his wild stage act and had relocated to New Orleans. He took up the name Guitar Slim and began to experiment with newer guitar sounds that included distorted overtones (a full decade before Jimi Hendrix). He had the chance to record for the Imperial label in 1951, cutting four songs, including "Bad Luck Is On Me", but they were unsuccessful. Next, he tried the Nashville-based Bullet label in 1952, and enjoyed a mild regional hit with the single, "Feeling Sad". This brought attention from both the Atlantic and Specialty labels in 1953, who each tried to add him to their rosters. Slim signed with Specialty and his first recording with them would became his calling card for the remainder of his life.

"The Things That I Used To Do" was engineered by the New Orleans legend Cosimo Matassa and featured Lloyd Lambert's band backing him up with special guest Ray Charles filling in on the piano. It would ride the R&B charts for 21 weeks, six at Number One, and would sell over a million copies. It also placed Guitar Slim on the road for a national tour, where he sold out major venues like the Howard in Washington, D.C. and a week-long gig at New York's famed Apollo. This remarkable feat at the Apollo was unmatched by all other top performers of the day.

He would continue to write and record songs for Specialty for another two years. Despite strong singles like "Sufferin' Mind" and "The Story Of My Life", sales could not match the success Of "The Things That I Used To Do" and Specialty decided to release Slim from his contract. He quickly signed with the Atco label, a subsidiary of Atlantic, who had tried unsuccessfully to sign him in 1952. His writing skills had not diminished and over the next two years, he charted four more times, including the song, "It Hurts To Love Someone" and "Down Through The Years".

Throughout his career, Guitar Slim had led a hard life that was marred by heavy drinking. In early 1959, the band set out for an East Coast tour despite the problems that he was encountering with his breathing as a result of his alcohol problem. In February while in New York City, the band had to carry an incapacitated Guitar Slim to his hotel room. At the time they believed he was just drunk, but later when they could not revive him a doctor was called. But, it was too late. Guitar Slim had died of bronchial pneumonia, a condition worsened by his drinking. He was just 32 years old.

Though Guitar Slim dabbled with a number of guitars in his brief career, his main squeeze was a Gibson Les Paul Goldtop with P-90 pickups. He is rumored to be buried with it. Slim played it through an overdriven PA system, apparently the guitar amps of the day simply weren’t loud enough! 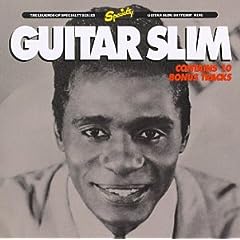 All About Jazz musician pages are maintained by musicians, publicists and trusted members like you. Interested? Tell us why you would like to improve the Hubert Sumlin musician page.