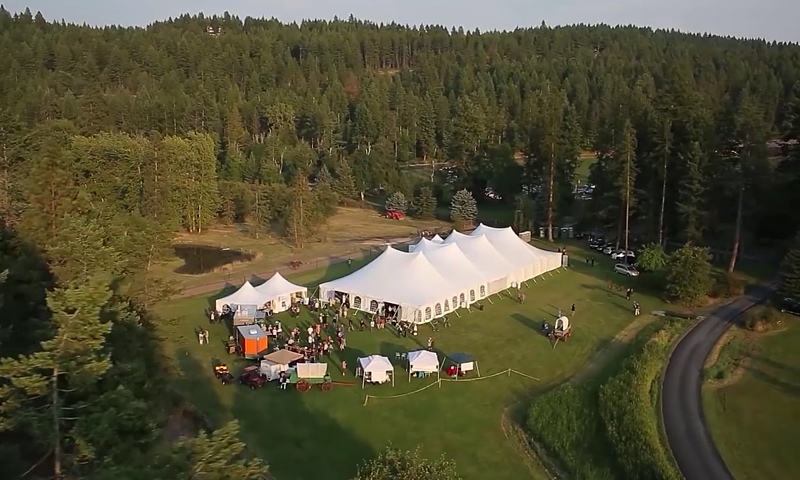 By MARK HOLSTON
September 21, 2015
Sign in to view read count

Some of the world’s best string masters have forsaken the usual big city venues to spend a week at historic Flathead Lake Lodge, a truly off-the-beaten-path destination for an event of this stature.

Forget for a moment the stellar roster of international guitar greats at Bigfork, Montana's annual Crown of the Continent Guitar Festival, their inspired performances and enthusiastic, SRO crowds. This annual weeklong mixture of master classes and nightly public performances on the grounds of a half century-old traditional "dude ranch" boasts something that likely no other festival in the world can claim: a nightly parade of 50 svelte riding horses trotting from one pasture to another and right past the tent that houses the festival's main stage. They snort, prance, kick up a little dust and literally brush up against the VIP tent where artists like Lee Ritenour and Dweezil Zappa are warming up for their turn in the spotlight. It's a majestic reminder that some of the world's best string masters have forsaken the usual big city venues to spend a week at historic Flathead Lake Lodge, a truly off-the-beaten-path destination for an event of this stature.

In its sixth year, the CCGF reached the milestone of enrolling 100 student guitarists in daily classes with a faculty of hand-picked specialists and featured soloists. The emphasis on education and equipping neophyte guitarists with advanced skills has already paid off big for one young musician. The Harlem, New York-based blues and jazz guitarist "King" Solomon Hicks came last year as a student and returned this season as a certified headliner. Barely 20 years old, the affable Hicks, who also excels as a crooner and swings easily between the poles of blues and jazz, has become a staple at The Cotton Club and is on a career fast-track.

Dependent on attracting students with diverse interests and ambitions, as well as an audience eager to fill a 1,000 seat tent for nightly presentations, the festival has embraced a wide universe of styles, focusing on those with the broadest appeal. Prominent is the ever-popular "singer-songwriter" category as well as Texas blues, funk, fusion, and rock of various incarnations. The just-concluded edition of the festival boasted such headliners as Jon Herington of Steely Dan fame, singer-guitarist Madeleine Peyroux, bluesman David Grissom, and pianist Dave Grusin, who sat in with Ritenour. In a bid to assuage the pop culture-focused segment of the audience, NBC TV's The Voice participant India Carney, a festival surprise guest, was injected here and there as a dollop of vocal sweetening. Rounding out the roster were regional groups like the Z Quartet, a jazz fusion unit led by local symphony conductor and guitarist John Zoltek, and a combo fronted by guitarist Max Hatt and egg-shaking vocalist Edda Glass that performed sleepy, minimalist pseudo bossa nova.

An "odd-bedfellows" kind of program line-up, however, led to some truly head-scratching moments. The Los Angeles Guitar Quartet, kings of middlebrow "crossover classical" repertoire, performed predictable selections from their recent recordings before tackling a surprise curveball—a piece "written" expressly for them by Dweezil Zappa, for whom they opened. The Son-of-Frank, who neither reads nor writes music, told a festival insider that he recorded himself playing brief improvised snippets and shipped them off to the LAGQ to be transcribed and stitched into an arrangement for four guitars. Living up to its low expectations, the brief performance came off as what it was—a thematically disjointed collection of overlapping dissonant motifs. Feigning a lack of appreciation for what he had heard, the work's creator popped back on stage and insisted that the quartet try it again. And, to no greater ends, they did.

Those thirsting for the high level of technical brilliance, intellectual curiosity and improvisational mastery as personified by the world's best jazz guitarists, however, have been left somewhat wanting. True, Pat Metheny has performed twice in six years, and fusion-meister Ritenour, the festival's de facto artistic director, is featured every go-around. But other than a fondly-recalled set by Julian Lage several years ago, and the presence this year of Brazilian virtuoso Romero Lubambo and up-and-coming São Paulo jazzer Leandro Pellegrino, the involvement of notable jazz guitarists has been scant.

It's not surprising that the presence of the two Brazilians provided many of the festival's most memorable moments. Curiously, it had taken organizers half a decade to recognize the existence of the formidable Brazilian guitar tradition and provide an opportunity for someone of the stature of Lubambo to perform on its main stage.

The Rio de Janeiro native featured repertoire from his just-released album Setembro on the Sunnyside label. "I've always been touched by North American composers and players," Lubambo told AAJ, "so for this album I wanted to just play songs that I love without thinking if it is Brazilian or American or anything else. I want more and more to play music following my instinct without thinking about it too much."

His set opener, the bossa classic "Influência de Jazz," by Carlos Lyra, was composed as a pointed criticism of the perceived negative influence of jazz on the bossa nova. In Lubambo's hands, however, the catchy tune provided the perfect platform from which to launch a bewildering barrage of stylistic permutations that included an array of Brazilian and jazz references. Lubambo upped the ante with every turnaround through the solo section, crafting a fiery crescendo of rhythmic intensity and improvisational daring that left even the most jaded audience members shaking their heads in disbelief at what they'd just experienced.

"Choosing a career in music was not really that difficult," Lubambo added, "but for me it took a long time. I have a degree in mechanical engineering and only after I finished the university did I decide to apply myself 100% to music. I started playing in a band when I was 14, but after my university years, music was calling me much louder!"

Lubambo has resided in the U.S. since 1985, and although he has become the accompanist of choice for an A-list of jazz stars, it's his long-running association with drummer Duduka Da Fonseca and bassist Nilson Matta in Trio Da Paz for which he is most noted. "Trio da Paz goes much beyond music," the guitarist explained. "It's friendship, it's struggle, it's life! That's what comes out when we play. And I think people hear and feel that. It will always sound full of energy and emotions!"

Lubambo's unceasing effort to up his game is what makes performances like what he delivered at the Montana festival possible. "I always try to improve," he added. "I always try to create something different and interesting to keep me happy with my music. And I'm lucky to work with so many types of music and musicians, and this keeps me on my toes all the time. I have to get better every year! That's the secret for happiness for me. Last year for example I started playing in trio with The Assad Brothers (two noted Brazilian classical guitarists). I loved the fact that I had to study so much to be able to play with those fantastic classical players! That made me grow fast! And I want that always; new situations and collaborations and, in the end, new challenges."

The 31-year old Leandro Pellegrino came to the festival as a student thanks his increasing international fame. Winner of the 2013 Montreux Jazz Festival World Competition, he was named recipient of the Wes Montgomery-Lee Ritenour Crown of the Continent Guitar Foundation Scholarship. That allowed him to spend a week studying with master musicians and adding even more technical heft to his personal style. For Pellegrino, being able to study with Lubambo proved to be a personal highlight. "Until the very first day of the festival I wasn't 100% sure if it would be worth it to join a Brazilian music class," he admitted, "but it took me five minutes to realize that it was the best option for me! Romero's class was amazing because there were only five students that had a reasonable knowledge of Brazilian music, and he was able to deliver an incredible amount of information in only five days. Getting to know Romero better also allowed me to hang with him outside the class and ask him questions any time of the day. It also led to me asking him to sit in with me."

As a young musician growing up in São Paulo, Pellegrino harbored a natural interest in Brazilian styles. It was jazz, however, that became an obsession. "I'm pretty much a jazz musician who happens to be Brazilian," he commented. "Naturally, I have a different background than most straight-ahead players course, and I consider myself to be very open-minded regarding any style of music." Early on, he took lessons from Olmir "Alemão" Stocker, a legendary Brazilian jazz guitarist whose nickname is "The German."

Pellegrino's contributions to the festival were impressive. During a workshop at a local community college, he demonstrated his stylistic breadth by playing a stunning, leisurely-paced interpretation of the standard "Darn That Dream" and then ripping off a technically-demanding version of a vintage Brazilian choro by composer Garoto (Aníbal Augusto Sardinha). Tapped to open for Ritenour, he played personal arrangements of "The Days of Wine and Roses" and "Norwegian Wood." Lubambo sat in for a festive reading of "Minha Saudade," a 1958 hit by pianist Joao Donato and guitarist Joao Gilberto. "I have a vast musical background," Pellegrino concluded, "but I have always forced myself into learning and absorbing the jazz language, since that's not my natural element. For now, I'll focus on accepting whatever music comes out naturally and just shape it in a way that I'm happy and it's fun to play."