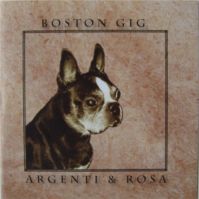 When Hank Mobley's "Funk in the Deep Freeze" and Eddie Harris' "Freedom Jazz Dance" are brought close together on a recording, hard bop critical mass occurs, giving rise to music like guitarist Enrico Rosa's "Stress Me" that opens the Argenti/Rosa recording, Boston Gig.

But this is a controlled detonation. So breezy and strolling are the performances that the artistic exigence may be likened to a train decelerating to a more relaxed velocity. That is not to say there is no heat here, there is plenty in the originals. The pianist and guitarist collaborated on 2003's well-received To the Old Friendship (Do-Re Music), with Rosa's "Dubbio" reprised on this current recording.

The pair's follow-up is an evenly conceived project that orbits that musical density called post bop. Rosa's contributions are all edgy, anxious compositions that throw off the shackles of convention, allowing the music to breathe and breathe deep. Argenti's piano is angular and sharp-edged on "Stress Me," after Rosa's incendiary introduction. The pair coalesce on Rosa's "Svezia in Fiamme," which is lightly reminiscent of Paul Desmond's "Take Five" in its bridge. Rosa blows through some impressive Wes Montgomery octaves in his solo, while Argenti gives his most melodic recital.

Then the real fun starts. Before taking on the hard bop canon, the pair warm things up with Dizzy Gillespie's "Bebop." While they do not play at the composer's death- defying tempo, they do assemble a credible bop reading. Rosa plays "Funk" with chords rather than single notes, giving the piece as soft contour, while Argenti plays foil to that softness with his coolly cerebral solo take; more cigar and demitasse than cigarette and shot glass. "Freedom Jazz Dance" celebrates soul jazz in a very European way, elegant and understated while retaining the seasoning of the original.

Boston Gig is very much a close to home recording, one thoughtfully conceived and performed.

Stress Me; Svezia in Fiamme; Bebop; So, That's How It Is; Dubbio; Funk In The Deep Freeze; Freedom Jazz Suite.