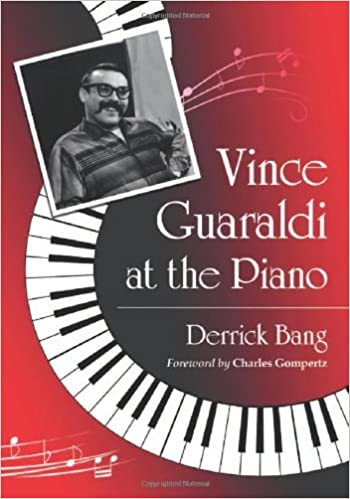 2012 Soon after autumn leaves fall, promos hit the airwaves for the various Charlie Brown Holiday specials. Those timeless animations are lathered up with marvelously hip jazz—that of pianist Vince Guaraldi. While umbilical tied to that franchise, Guaraldi possesses an enormously robust repertoire and a broad-ranging performance career about which many jazz fans know little. That legacy is brought into light in Derrick Bang's informative biography "Vince Guaraldi at the Piano".

In this fascinating effort, Bang, newspaperman, author, film critic, blogger, noted Peanuts authority and ardent fan tells of Guaraldi's musical life in meticulously researched terms. Beginning with Vince's youth and his dabbling at a family piano and encouraged by uncles (who themselves later made musical names for themselves), Bang describes Guaraldi's early musical development. He then drops us into the halcyon days of San Francisco jazz and its many clubs, habitants, and dizzying goings on—times later "flowering," and rocking. Guaraldi's interaction in that environment with musicians, club owners, music biz types, and others is covered with great specificity. Bang's writing is empirically comprehensive and researched without being sterile. It reads with great rhythmic pulse. Jazz artists such as Cal Tjader, Dave Brubeck, Woody Herman, Johnny Mathis, and jazz world icons Ralph Gleason and even "Professor" Irwin Corey are depicted playing vital roles in Guaraldi's Bay Area career. Later on in the Rock days, Bill Graham, Van Morrison, and others well-known play cameos in "Dr. Funk's" journey.

Not a hagiography and not ponderous in things personal or gossip-flavored, this facts-driven effort is focused on the music, the music game, and Guaraldi's riding the cresting waves and troughs as a player and composer within it. The author's crisp writing elucidates the randomness, chance encounters, and odd synchronicities of the music world. With more focus on facts than anecdotal commentary, Guaraldi is painted as an artist with a fierce drive for excellence, a ferocious energy to perform (yes, he played strip clubs and lounge gigs), a man who overcome physical limitations, (hands and physique smaller than average, ergo, "The Italian Leprechaun") and Guaraldi's lack of formal classical piano training and early sight-reading shortfalls (he was rejected initially for Woody Herman's band). Musician readers—and perhaps the general public -will likely listen more attentively—and enjoyably -to Guaraldi and the Peanuts shows after reading this bio. It resonates that much.

Pre-Peanuts performances and recordings with long-time associate Cal Tjader before and during the Bossa Nova craze, with talented Brazilian guitarist, Bola Sete ("Seven Ball"), and Guaraldi's touring with Herman (after a successful second tryout) are portrayed in detail. Bang exposes the rather unsavory business practices Vince faced (as did many others) via his hands-tied and labyrinth-like contracts with Fantasy Records (he later "escaped"). Through all that, Guaraldi forged on composing and playing. He composed and performed his jazz Mass— accompanied by the St. Paul's Church adult and children choir at the Grace Cathedral dedication and did some TV "casuals" and film work as well. The author takes the reader to the career breakthrough that came via Vince's Top 40 hit "Cast Your Fate to the Wind" (actually, a B-side release about which his label hated). Musicians with a perceptive "ear" will learn and history buffs will read how the iconic "Linus and Lucy" tune was a somewhat of a compositional love-child of that hit record, as Vince favored ostinato bass and 3rds and 6ths with his small right hand.

Since Charles Schulz's Peanuts and all things Charlie Brown are what are most familiar to current audiences, the author takes us through Guaraldi's initial work with his "Jazz Impressions of Charlie Brown" album (which had roots of sorts in a documentary about San Francisco ballplayer Willie Mays). Activities and recordings emanating from the subsequent "Peanuts" TV specials are covered as they developed. We see how a chance hearing of "Cast Your Fate to the Wind" and a major soft drink advertiser's desired competitive strategy led to Guaraldi landing the first Charlie Brown TV gig. Vince's later foray in to the San Francisco Rock scene and experiments with the Fender Rhodes piano and electronics are also covered. Bang details Guaraldi's influence on later keyboard stars such as David Benoit, George Winston, (who both discovered Vince when they each were teens), and also on another fan, Master trumpeter, Wynton Marsalis. There's plenty of mention of Vince's many sidemen and also a lion's share of Guaraldi's playing itineraries. That piece, while perhaps not of great interest to some, gives the reader a clear picture of Vince's highly-energized and somewhat nomadic jazz life, his undeniable stick-to-itiveness, and his ferocious drive to play and compose not matter what Fate threw at him. Guaraldi's frenetic pace of activities—both Peanuts related and otherwise -are covered up to the pianist's untimely death at age 47. As a coda, the book provides reminiscences from sidemen, fellow musicians, and people who knew Guaraldi and it also offers an exceptionally comprehensive Guaraldi discography and filmography.

Derrick Bang has done a mitzvah to the jazz community with Vince Guaraldi at the Piano. It is a terrific, informative, and exceptionally enjoyable read. Whether one is a Peanuts fan or not (can that possibly be?), this is a fascinating book and a must read for those with a jazz history bent. It equates in quality to any celebrated jazz bio out there—past or present.