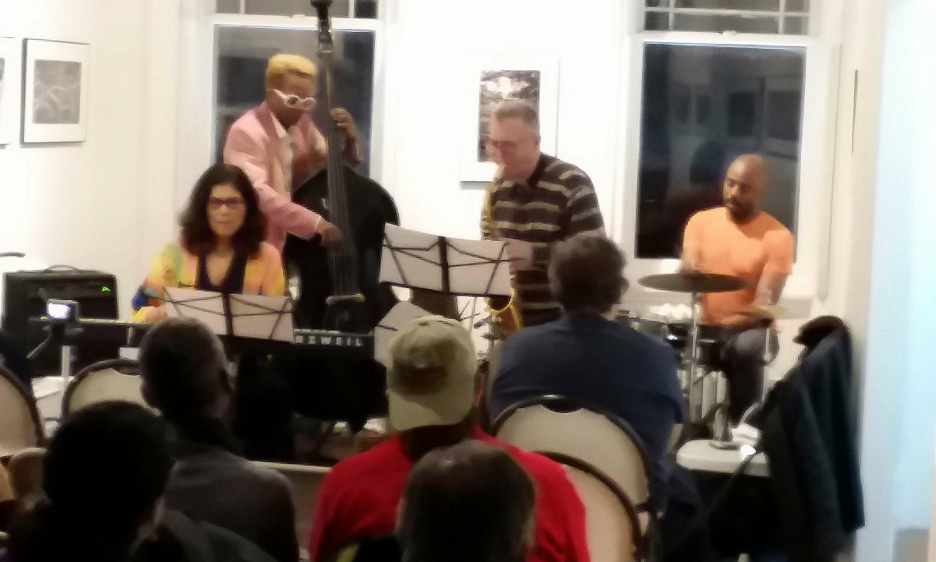 This show afforded a rare opportunity in an intimate setting to hear the great Philly-grown pianist Sumi Tonooka with Bobby Zankel, a cutting edge alto saxophonist admired for his composing, arranging, and band leading. So this reviewer hopped over on short notice to the Da Vinci art gallery in Queen Village to hear them. It turned out they provided the last of three sets. The other sets featured an innovative singer, Bonnie Lander, and a small avant-garde group, Sirius JuJu. The show was curated by Steve Tobin for his organization "Fire Museum Presents," as part of their series of events emphasizing avant-garde and experimental music of diverse genres. Even this sophisticated arts-savvy audience had to stretch themselves mindfully to make it work, but the effort payed off in terms of novel and rich musical experiences. All three sets deserve notice here.

Bonnie Lander is an avant-garde soprano and all-around supremely trained and creative musician whose work combines free improvisation with structured composition. Rather than singing within scales, modes, and conventional rhythms, she seeks to express "Inside Voices," the sounds, noises, and emotional narratives that utilize pitch, timbre, resonance, articulation, and vocal fluctuations inherent in the voice-as-instrument. This emphasis on what is inherent in the sound itself provides a musical exploration of personal experience mixed with confrontational, visceral human expression. It could be thought of as the auditory equivalent of improvised modern abstract art, a "sound painting," as it were. Such reaching for the essence of sound can be traced back to John Cage and Ornette Coleman, but the way Landers used her beautifully honed vocal apparatus was uniquely her own. Once the listeners suspended conventional expectations, they experienced a range of profound emotions from joy to sorrow to agony and perplexity, showing how sound itself can be the deepest expression of feeling. Such an experience changes the listeners' sense of music from tunes to sounds. Lander's work places improvised jazz in the larger context of contemporary experimentation in all the arts. From a jazz perspective, it could be said that singers like Betty Carter and JD Walter approached such daring borderlands, but Lander has gone all the way into the new territory.

The group called "Sirius Juju" sounded a lot more like Coleman's and other's "free jazz" as we know it. The musicians -Heru Shabaka-ra on trumpet, Mike Watsun on bass clarinet, Alex Kulick, guitar, Ben Rosen, bass, and Julius Masri, drums -performed well- executed free improvisations, which they called "The Ninth Pitch," with the finesse of seasoned jazz men but with all the freedom of expression that the avant-garde brought into jazz. This reviewer was particularly taken with Watsun's work on bass clarinet, which came right out of Eric Dolphy, and Masri's exceptional drumming, which maintained a solid, unrelenting drive while incorporating the most nuanced, complex intricacies.

Coming after these limit-stretching sets, Zankel's music, which in most contexts is heard as "far out," felt close to the mainstream—or at least the main stream of the avant-garde. In addition to three of Zankel's own frequently played compositions ("Anthem for the Ancestors," "Spirits Break to Freedom," and "Continuance"), the quartet rocked Tonooka's "Into the Void." Tonooka's sharp, clear, and well-crafted piano work put her own signature on the music. Richard Hill's shocking pink sport jacket and white-framed sun glasses were offset by his solid, sophisticated post-bop upright bass playing, and Chad Taylor did his typical prodigies of service on drums. What is always so impressive about Zankel's work, whether in a small ensemble such as this, or in the Warriors of the Wonderful Sound big band experience, is the sense of timeless beauty that emerges from complex mixtures of motifs and riffs, and the way in which his music can accommodate soloists of all backgrounds and persuasions. Tonooka, whose teacher was the awe-inspiring Bernard Peiffer, was instantly recognizable stylistically, while Zankel went on doing his own thing. Yet the combination of the two made for some "wonderful sounds" and a delightful experience.