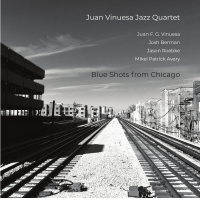 Chicago, a city of big shoulders, continues to present proof of poet Carl Sandburg's words from the poem of the same name... "Come and show me another city with lifted head singing so proud to be alive and coarse and strong and cunning." Why is this? Because Chicago in 2020 remains the same as evoked in these words from 1914, "fierce as a dog with tongue lapping for action." It is a city that welcomes all comers who can bring it, whatever "it" is.

Case in point Juan Vinuesa's Blue Shots From Chicago. The Spanish saxophonist spent a few years in Chicago mixing with the city's cutting edge musicians and, judging by this recording, he must have been a welcome participant. His recording is the opposite of a vanity project, it has the character of an inveterate working quartet. A valid comparison might be the quartet Old And New Dreams made up of Ornette Coleman's former sidemen Dewey Redman, Charlie Haden, Don Cherry, and Ed Blackwell. Vinuesa's updated dreams include cornetist Josh Berman, bassist Jason Roebke and drummer Mikel Patrick Avery, three musicians at the center of Chicago's jazz current moment.

All the music here was written and arranged by Vinuesa. "Ghost Town Studio" has the disciplined casualness only accessible by skilled performers. It is a blues wrapped in insouciance and powered by Roebke's firm hands. That blues feel permeates this session with the aromatics of "Red Line Ballad" and "The Alibi" a Coleman-inspired piece. Vinuesa's tenor can be described as a cross between Dewey Redman and David Murray, combined with the sinewy brashness of Berman's cornet, the duo makes for a potent pairing."In Paul's Mirror" (for Paul Stocker) starts with Thelonious Monk but surfs a New Dutch Swing with Vinuesa channeling his inner Roscoe Mitchell. "Luther's Mood" (for Luther Thomas) is a lament à la "Goodbye Porkpie Hat," sustained by some of Avery's sizzling cymbal science. Ending with the buoyant "I Børneteater," which translates into "In Children's Theater" from the Danish, the quartet summons a circus that might have originated in New Orleans. Keep an ear out for Vinuesa's upcoming projects.