By NENAD GEORGIEVSKI
March 10, 2020
Sign in to view read count 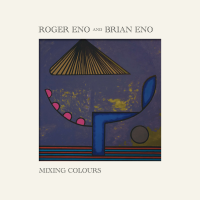 In a storied and kaleidoscopic career which has seen him change the course of music several times, it is fair to say that British musician, producer and visual artist, Brian Eno has never been one to park himself in the same spot for too long. It will come as little surprise then, that his latest effort, in collaboration with his younger brother, pianist and de-composer Roger Eno, titled Mixing Colours finds him inhabiting a seemingly known but vastly different space altogether.

The Eno brothers first collaborated on the Apollo, Atmospheres & Soundtracks (EG Records, 1983) along with guitarist and producer Daniel Lanois, a recording which is rightfully considered a milestone in the ambient genre. In the aftermath, Brian Eno and Daniel Lanois produced Roger Eno's debut album Voices (EG Records, 1985). This trio worked again after many years on the 2019 reissue of the Apollo soundtrack when they worked again on new music inspired by this documentary/event which was released on the 50th anniversary of the Moon landing.

Mixing Colors consists of material which has been gradually building since 2005. Their modus operandi was quite simple—Roger Eno would record ideas and compositions and then he would send them to Brian who would work on them further. And this communication has been happening for years. Obviously, each artist has had a different career path of his own and each has brought his own unique musical experience to this duo. Yet, more importantly—though it can't easily be adequately explained nor quantified—being siblings seems to bring an unspoken intimacy to the music which makes it feel more substantive than it otherwise might.

Roger and Brian Eno successfully join forces in the kind of way that two long-time collaborators usually do and this often feels like osmosis. On this record, the Eno brothers focus on emotive, reflective soundscapes which gradually draw you in with their intangible sense of mystery. They have created a beautiful set of multi-layered and sensitive compositions which are full of subtle and rich eco-systems that seem to exist in their time and place. The resulting sound is warm, inviting and cinematic, where the authors maintain a slow, spectral pace. Album opener "Spring Frost" quickly immerses the listener in that world or location which is half-forgotten and distant yet familiar. It is bathed in shadow where layered electronics intermingle with soft, ringing notes. Both artists take their time to color all of the details and to introduce their recognizable and emotive sonic threads. It also sets the template for the album's elegant aesthetic.

"Burnt Amber" features drifting chimes which echo into the distance. Every sound and shade really intensifies the experience and these subtleties amplify its emotional resonance before being allowed to bleed into the background, having left a lasting and haunting impression. It has a delicate and intangible quality to it. "Celeste" denotes a heavenly blue color and is reminiscent of Roger Eno's previous output. It is a beautiful composition which gracefully builds around atmospheric electronics punctuated by soft, repeated keyboard hooks and piano melodies. It feels like nostalgic rumination that exemplifies the narrative. The ethereal "Wintergreen" features shimmering electronics which glide on gently breaking waves of ringing melodies that are subtly stretched and warped.

Very quickly, it becomes apparent that there is a profound sense of freedom in these compositions, as both artists follow their musical instincts to previously unexplored sonic spaces. Uninhibited by notions of traditional song structure, they are free to go wherever the mood and the music takes them, like embarking on journeys with no map. Roger Eno is clearly the primary musician with the keyboards or the piano which establishes the framework for Eno to embellish. The music is palatial and eloquent, where you not only listen to it but you also immerse in it. Even though their nature is ambient still, these are relatively short compositions which are never allowed to drift too long or become too formless. If any work from Brian Eno's enormous and ever-growing output is directly referenced on this record, it might be the iconic albums with pianist Harold Budd from the '80s, though Roger Eno's playing only partially inhabits Budd's universe. On the other hand, those albums with Budd were produced around the same time as Apollo and Voices at Daniel Lanois' former studio Grant Avenue in Canada.

"Obsidian" utilizes a church organ which sounds like a meditation on tone and space that shapes in unexpected ways where the worlds of sacred and profane intermingle. "Blonde," "Dark Sienna" and "Snow" are a solo piano/keyboard pieces that have a new age feel to them, each note contemplated with care. Roger has a minimalist approach to his piano/keyboard playing where he prefers melodies with a folk-like simplicity, pieces one can hum. Each note is contemplated with care, but his ability to evoke moods—ranging from melancholy to gentle joy—out of carefully chosen notes is remarkable. Brian's presence adds unique elements to the sound and the background, but it doesn't drastically alter them. Rather, he deepens what already is a truly captivating template.

While the approach to all of these works may be described in simple words it still doesn't easily explain the varied approaches to these compositions. A key component of the music is the unhurried way in which the Eno brothers let ideas develop. Probably "unfold" is the more appropriate word. Often listening to these compositions can induce similar emotions to watching time-delay footage of flowers blooming. The act of listening becomes a hypnotic experience where the mind follows one melodic path only to be gently interrupted and redirected in another direction as harmonies are gradually introduced and shift. Emotionally, this music has the power to make one feel nostalgic for places either never visited or nonexistent.

Apart from the music, Brian Eno has produced and directed seven videos for tracks for this album in cooperation with software designer Peter Chilvers. These are videos taken from a train window that softly move with the music. In one of the press releases, Eno states that much of this album was worked on while traveling on trains. Though ambient, Eno's music has never been stationary nor passive regardless of the tranquil qualities of this type of music. Instead, it suggests that the music's inner workings are some kind of a cross between imaginary travelogue and meditation tool. Far from being a soft background for peaceful meditation or music for wallpapers, it is the recordings that take you on the journey, and they aren't merely an accompaniment.

All 18 compositions on Mixing Colours are evocative and transporting and strive toward a new vocabulary for connection and communication. On each new listening, each track offers a fresh, sensory experience. The subtle, barely-there melodies and sounds mesh in a way that the music constantly shapes and reshapes itself. Their music is a strange and unusual world, but one that feels right at home once you've explored it long enough.