By Ian Patterson
December 25, 2017
Sign in to view read count 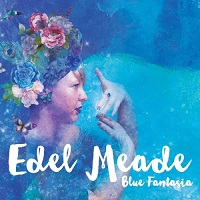 Although Edel Meade has graced the Irish jazz scene for a decade Blue Fantasia is the singer's debut album. Meade has honed her craft under the tutelage of Sheila Jordan, Bobby McFerrin, Norma Winstone and New York Voices and is a respected jazz vocal teacher in her own right. Her Edel Sings Julien Colarossi and Johnny Taylor in particular afforded plenty of room, both as colourists and improvisers. Linley Hamilton's contributions on the sultry, midnight confessional "Sideways" and the Norah Jones-esque "I Thought It Was You" are less pronounced but the trumpeter lends undeniable warmth. Tommy Gray parades an array of textures on sticks, brushes, mallets and cajon, while Kevin Higgins' electric bass ostinatos infuse songs old and new with a contemporary edge.

Several of these tunes have been maturing in Meade's live shows for a number of years; the gently bossa nova tinged "I Tried to Take His Life" is as thematically curious—death in the kitchen sink—as it is musically seductive, with Meade's vocal, as caressing as a summer breeze, lent sympathetic support by Hamilton and Taylor; the singer is quietly commanding on the aching ballad "Love Lost"—recorded by Scott Flanigan on Point of Departure (Self-Produced, 2015)—where the faint crackling of needle coupling with vinyl at the outset and the tinny, radio broadcast effect towards the end add an air of melancholy and nostalgia.

Meade delves into sassy R&B on "Blind Eye," Colarossi tuning into the vibe with a telling solo over funk bass and electric piano comping. There's a pansori feel to the dry drum-beat intro to "Blue Fantasia," a bold stylistic departure from Meade that marries minimalist impressionism—sighing cymbals, tinkling percussion, echoing gong—with spoken word intimacies. From the brooding title track to the boogie of "Don't Stop Till You Get Enough." Here, Meade's teasingly slow delivery converts a dance-floor classic into an irresistibly sexy grind, infused with bluesy tones and infectious hand-claps of suggestive rhythm. Wind chimes and stream-like shaker impose a state of reverie at the outset of "Beyond the Coda," though drums, electric piano and guitar inject gently coursing pulse beneath Meade's lulling improvisation.

There's not a weak track in these dozen, stylistically varied, artfully crafted compositions. On "Iris," Meade sings: 'This is your time to shine.' So too, it seems for Meade, for with Blue Fantasia Meade confidently announces herself as a composer, interpreter and singer of notable talent, and one increasingly following her own muse.

Sideways; Cheek to Cheek; Love Lost; Prelude; ‘Round Midnight; I Tried To Take His Life; Blind Eye; Blue Fantasia; Don’t Stop Till You Get Enough; I Thought It Was You; Iris; Beyond The Coda