BY VITALIJUS GAILIUS
December 26, 2017
Sign in to view read count 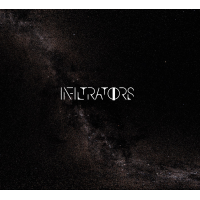 Behind the name Infiltrators stand three well-known virtuoso musicians of Lithuania: pianist Dmitrij Golovanov, drummer/percussionist Arkady Gotesman and saxophonist Jan Maksimovic. "It's impossible to remember exactly when everything started because my collaboration with J. Maksimović and experiments with electronic sound started a long while ago," D. Golovanov said in one of his interviews. However, a few years back A. Gotesman joined them and the trio named Infiltrators emerged. The sky of Lithuanian jazz was perfused with dazzling light.

The trio performs not only in Lithuania but also in Ukraine, Poland, Estonia, and Latvia. Furthermore, their self-title debut album was released earlier this year. It received acclaim from local music critics and music enthusiasts. The best evidence of its success was that right after the album presentation at the "Vilnius Jazz 2017" festival, the CD was sold out from the merchandise booth.

All tracks were recorded live on November 16, 2016 in Kaunas, during the trio's performance at the local club "Orixo." Material is divided into seven untitled parts, however, I believe there was no point to split since everything sounds like a continuous flow without any interruptions. Perhaps only between parts five and six a listener can hear somewhat less fluid transition from one musical theme to the other, but generally a feeling of wholeness never disappears.

The album begins with a little bit of chaotic dialog between synthesizer and drums. Nevertheless, D. Golovanov and A. Gotesman catch each other's vibe up so quickly. J. Maksimowicz joins them too and an unforgettable journey begins. The music they play is totally improvised. It is likely that trio members discuss some themes before playing, but they use no scores. It seems that all trio members are tightly interconnected. That's the secret of their success! Infiltrators music is based on present time. All compositions have been born here and now. It is a spontaneous act, a synergy of three talented people, which takes you away from the present to eternity.

Needless to say, the collective occupies a unique space: the sound of jazz, electronic and improvised music. D. Golovanov shows his incredible creativeness and exceptional multitasking skills. He not only plays synthesizer and improvises on the piano, but also uses a sampler to capture impromptu ideas. J. Maksimović takes the key role in creating an intimate atmosphere. He uses reverb and some other effects on his soprano saxophone that put an emphasis on the tone and atmosphere rather than structure or rhythm. Sometimes J. Maksimović's tone reminds the listener of the delicacy of Jan Garbarek. A. Gotesman, perhaps the most notable and experienced trio member, demonstrates exceptional technique and a perfect sense of composition. The debut album is dominated by gentle drumming, use of brushes and swizzles, however, there was room for more aggressive free jazz patterns to emerge as well.

It must be said that "Infiltrators" does not fit in any stylistic frames. It is certainly true that a milestone of their music is free/avant-garde jazz, especially on percussion and keys. However, compositions they play cannot be defined as jazz in the full sense of the word. Finding a definition for the music that this trio plays might be an inconceivably tough task. One can draw parallels with the legendary Ganelin Trio, but that wouldn't be correct. Infiltrators play in their own manner and approach new valleys of sound where no one has ever been before.