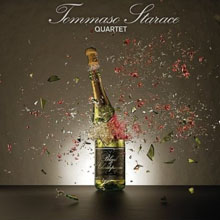 Somewhere in a parallel universe far, far away Tommaso Starace is fêted as one of the finest saxophonists in contemporary jazz. It's the only way to explain why Starace remains so underrated on this little world. Blood & Champagne, his fourth album, should bring Planet Earth into line. Starace has a distinctive, hard-edged, tone and a style that brings together elements of the bop and post-bop greats right back to Charlie Parker. He creates an intense and exciting sound with, at times, a genuinely visceral quality.

The Italian-born, UK-based musician regularly leads bands in both countries. On Blood & Champagne, Starace leads three British players who are among the finest the country has to offer.

Bassist Laurence Cottle's varied resumé includes work with Claire Martin, Tim Garland, Brian Eno and Black Sabbath. He favors the electric bass guitar, and plays with a fat, rounded, tone whose richness and warmth is an excellent complement to Starace's dryer, tighter, sound. Pianist Frank Harrison is a founder-member of the Orient House Ensemble, fronted by star altoist Gilad Atzmon: his playing sparkles with invention—percussive yet romantic. Chris Nickolls doesn't yet have the back catalogue of Cottle or Harrison, but this young drummer swings with apparent ease. The album also benefits from terrific sound quality courtesy of Derek Nash at Clown's Pocket Studio.

Starrace's playing gains in confidence and ingenuity with each album. He opens this album emphatically with his alto, but some of his most exciting playing is on the soprano sax. On Billy Strayhorn's "Johnny Come Lately," he plays his soprano with terrific upper register control and purity. On his own "Intercalare," an upbeat number based on a short, repeated, melody, his soprano playing is bright and good-humored. Starace is at his most intense on his lengthy solo introduction to Betty Comden and Jule Styne's standard, "The Party's Over." The emotion in his playing is almost palpable, the tune adopting a more romantic mood once the rest of the musicians take over, with Starace also softening his tone when he returns for the final third.

Starace is a lover of photography, as he made plain with his second album, Tommaso Starace Plays The Photos Of Elliot Erwitt (Frame, 2006). On Blood & Champagne, Starace pays tribute to Robert Capa, famous for his shots of the Spanish Civil War and the D-Day landings, the photographer's work and lifestyle inspiring the frenetic, hard-driving, title track. This love of the visual image is reflected in Starace's playing, which readily conjures up stunning images of its own. An exciting talent, Starace is developing a seriously impressive body of work.