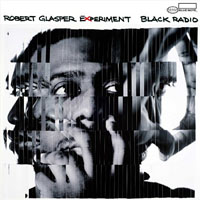 Depending on your age, Houston-born pianist/composer Robert Glasper is—like trumpeters Christian Scott aTunde Adjuah and Ambrose Akinmusire, and bassist/vocalist Esperanza Spalding-either the herald of a new world a-comin' when jazz musicians will be heard on pop radio on a regular basis, or he's a throwback to the golden age of the seventies, when jazz stars, from Herbie Hancock to Donald Byrd, were played on African-American and pop stations.

Blessed with a fleet-fingered, countrified approach to the piano that blends gospel, Thelonious Monk and hip-hop producer J Dilla, Black Radio is a propulsive, poetic and profound recording that deftly and defiantly destroys the market-driven barriers that sadly make terrestrial radio the Apartheid-airwave experience it is today. Like the most successful jazz musicians who had pop hits back in the day, Glasper understands that it's not about extended, solos (those can be heard on his last three Blue Note releases); it's about creating an open, melodic and rhythmic quantum universe where, in Duke Ellington's beautiful phrase, "the feeling of jazz" effortlessly melds with R&B, rock, hip-hop, neo-soul and quiet storm formats.

Glasper also perceptively peeped that great records are all about the collab, and on Black Radio he's in superb company, with Erykah Badu, Ledisi, Chrisette Michele, Bilal, Lalah Hathaway and Musiq Soulchild, lending their neo-soul vocals on blue-lights-in-the-basement ballads like "Ah Yeah," and Sade's "Cherish The Day." Glasper and company puts a turbo-charged, hip-hop spin on Mongo Santamaria's Latin jazz classic "Afro-Blue," and the leader revives his own "Gonna Be Alright (F.T.B.)," previously released on In My Element (Blue Note, 2007), but this time with lyrics rendered in lush-life fashion by Ledisi. Rapper Mos Def's Crooklyn cadences rock the title track, contrasted by the martial reinterpretation of David Bowie's guitar-centric "Letter to Hermione" and a twilight-toned reimagining of Nirvana's classic "Smells Like Teen Spirit," complete with Casey Benjamin's grooving and ghostly vocoder lead vocal, and Hathaway's ethereal fills.

Buoyed by the swing-at-the-speed-of-sound support of Benjamin, drummer, Chris Dave and bassist Derrick Hodge, the ingenious, swinging, syncopated science of the Robert Glasper Experiment will no doubt make the 21st century reintegration of jazz aesthetic into pop radio a reality.