By Woodrow Wilkins
March 26, 2009
Sign in to view read count 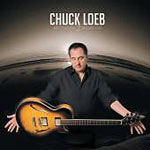 A knock on smooth jazz is that it's too bland—safe for those who don't fully appreciate instrumental music, but boring to those who do. Once in a while an artist whose music fits within the format breaks from the pack. Enter guitarist Chuck Loeb.

Over the years, Loeb has associated with many across the jazz spectrum, including Stan Getz, Jay Beckenstein, Michael Brecker and Victor Bailey. In addition to his solo career, he has been a member of Metro, Steps Ahead and The Fantasy Band. Between 2 Worlds presents Loeb with a jazz trio and a few additional players here and there throughout.

The title came about because the songs were recorded in sessions in both Europe and North America, but it is also symbolic of the bridge between smooth jazz and more adventurous music. The supporting cast includes several major session players along with his wife, Carmen Cuesta, and daughter Lizzy Loeb.

The title song again features Cuesta's airy vocal chant, but this time Wolfgang Haffner takes drum duty. Loeb and Cuesta co-wrote the song, based on a chorus she had been practicing; the vocal-guitar combination gives the song a night-on-a-moonlit-beach feel.

"Let's Play" features Loeb, Weckl and Veasley in a high-speed, straightforward jazz mood. After the opening melody and middle break, the song shifts into an ostinato passage, with Loeb and Veasley repeating the same phrase while Weckl steps outside the box and incorporates his entire drum kit.

Loeb, like many smooth jazz artists, normally records albums that are heavy on keyboards, programming and production—elements lacking on Between 2 Worlds that result in a freer, more natural sound. Cuesta and Lizzy Loeb contribute compositionally to some of the original tunes, with Antonio Carlos Jobim and James Taylor Quartet represented by one song each. Among the other artists who appear on the album are Eric Marienthal, Brian Culbertson, Nathan Eklund and David Charles.