The Way Ahead: Bells, Ghosts and other Saints

By MARK CORROTO
December 25, 2018
Sign in to view read count 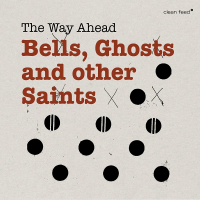 Perry Farrell, of the rock band Jane's Addiction, might have said/sung it best in 1988, on the track "Ted, Just Admit it..." when he whispered "Nothing's Shocking." Indeed, nothing is in the 21st century. Marcel Duchamp's painting "Nude Descending a Staircase, No. 2" (1912) is mostly admired today, and certainly not the trigger for a riot. Nor is the music of Ornette Coleman and Charlie Parker, or Louis Armstrong for that matter. Your father's and grandfather's revolutions are today symbols of beauty, to be admired and incorporated into the creation of even more beauty.

The Scandinavian septet The Way Ahead utilizes Albert Ayler as a touchstone to amplifying this beautiful revolution, but they do so indirectly. It is not until the final track, the title track, that Ayler is directly addressed with a composition by drummer Tollef Østvang. Taking three celebrated Ayler titles, "Bells," "Ghosts" and "Saints," the septet recirculates the great man's primal constructions of brass anthems and marches. Its accomplishment are not pulled from thin air though. Members of The Way Ahead have prepared for this outing with their varied projects, saxophonist Andre Roligheten and drummer Tollef Østvang in Friends & Neighbors, saxophonist Kristoffer Berre Alberts and bassist Ola Høyer in Cortex, trombonist Mats Äleklint Quartet and vibraphonist Mattias Ståhl in various incantations of the band Angles, and trumpeter Niklas Barno in Mats Gustafsson's Fire! Orchestra.

The band stands on the shoulders of several giants here. "Headway Heat" borrows threads from both Anthony Braxton and Philip Glass' simple repeated figures. They bend and shape time without shocking scandals. Hearing Äleklint's vibraphone frame the individual solos on "Skremmerud" and "Molefonken" makes you wonder what Ayler would have sounded like with the spectral sounds enshrouding his music. Elsewhere, the compositions become mini-universes themselves. Roligheten's "Tåkefyrste" and "Lakenskrekk" play out as unworried strolls through this former battleground. One that has now become a beautiful park.

About The Way Ahead