Home » Jazz Articles » Behind the Lens with C. Andrew Hovan

Advertise
5
Behind the Lens With... 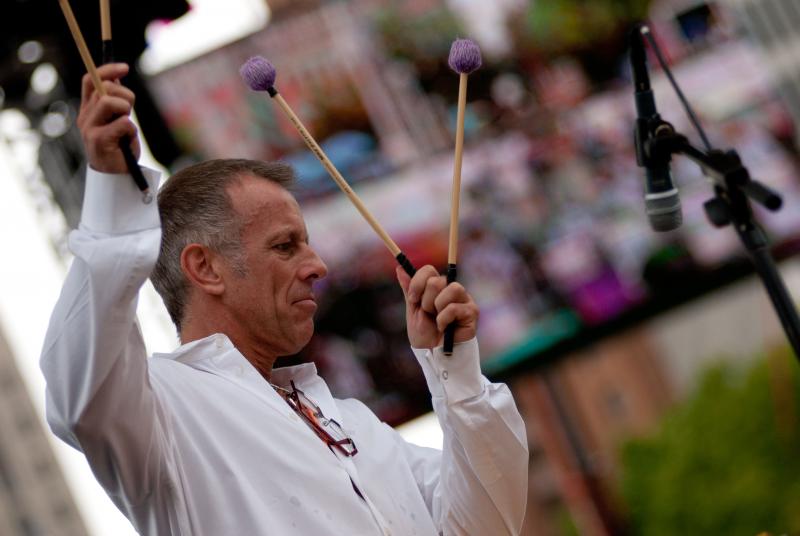 By C. Andrew Hovan
July 26, 2012
Sign in to view read count
Meet C. Andrew Hovan:
A devoted jazz fan since my school days, I have had the great advantage of combining many of my loves in a variety of creative ventures. A musician and writer, I have been an avid photographer since my freshman year in high school. My college studies led me to Boston and the Berklee College of Music and then I later decided to pursue a career in education. Having neglected my photography for many years, I decided about 15 years ago to combine my love of music with my passion for capturing special moments on film.

Gear:
Early on, I shot with Pentax gear as that was all I could afford being a student only working a part time job. Later, when I got back into photography, I decided to pursue my desire for owning Nikon gear. I worked with film for many years and owned a variety of Nikons, including the FA, F3, and F4. My first digital Nikon was a D1X, closely followed by a D70. Currently, my main body is a D7000 with a D200 as my backup. I use a variety of Nikkor lenses, but most often shoot concerts with a 300 mm F4, 80-200 F2.8 zoom,35-70 F2.8 zoom, and an 85mm F1.8.

Teachers and/or influences?
My main influence has always been Pete Turner. As an avid jazz record collector, those stunning CTI covers with Turner's photos have always struck a chord with me. I also studied in high school all the greats, including Ansel Adams, Ernst Haas, Jan Groover, Art Kane, and Jay Maisel. I often stayed after school to spend hours in the darkroom processing and printing black and white prints. As time went on, my desire to work with color manifested itself in a grand way, the fridge often filled with cases of Kodachrome. I have always been most interested in finding patterns and interest in details and often shoot with telephoto lenses. I rarely shot people before deciding to pursue concert photography, which I find somewhat amusing. As a result, I really have no influences in this area, but am my own worst critic in looking over the results of my photo shoots.

I knew I wanted to be a photographer when...
I realized that the camera can take on a perspective to a subject that shows you things the naked eye often overlooks. It's all about angle and framing and when done well, it never ceases to amaze and inspire me. 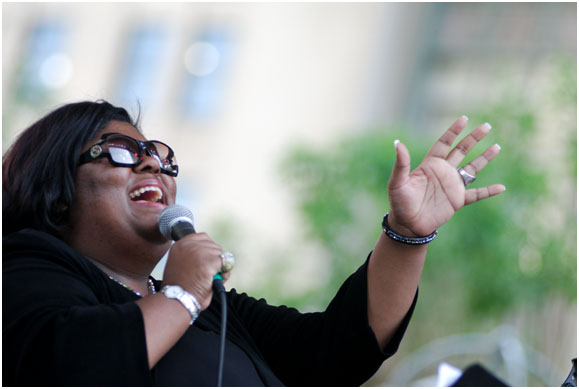 Your approach to photography:
These days, I have two creative avenues that interest me in terms of my photography. For myself, I love to hang out at classic car shows and shoot vintage automobiles, focusing on details, textures, and unique perspectives. I love the challenge of working with what I come across and making something out of it, as you have little control of where the cars are parked and how the lighting plays out. I guess the same thing could be said of concert photography. Lights, stands, and access to the stage are often obstacles to be overcome and I love the challenge. Like jazz itself, I go with the moment and try to anticipate what the moment may bring. Being a musician definitely helps in this regard as my knowledge of the tunes helps me be prepared for peak moments where musicians may be their most animated. I also once read it's wise to find a spot for shooting where all the other photographers are not gathered. Most times this works for me and I always try to shoot as much as I can because the more you cover the better your odds are of catching that defining moment.

Your teaching approach/philosophy:
I am largely self-taught and really not involved in instructing others, although my son has recently expressed and interest in getting some pointers from me. As for advice for the novice, I can say I am a big advocate of using the law of thirds in composing shots. You also need not worry about always having the camera straight and level. Some of my favorite shots were done at an angle where I was able to get rid of come clutter on stage and give the photo a unique look. The first time I did that it was a real eye opener.

Your biggest challenge when shooting indoor (or low lighted) events:
It's always challenging when shooting concerts as your ability to get where you need to be for that perfect shot is often limited. You also have to be aware of not disturbing those who have paid to be there to listen to the concert. Shooting in small clubs is also like trying to catch a shot in a cave, although the ability of today's new cameras to shoot in low light has been a great advancement. You also need to be flexible and realize you might not get everything you want.

Your biggest challenge when shooting outdoor events:
The space between the patrons and the stage, along with stage height, are the biggest factors in determining your stress level when shooting outdoor fests. I also find that mid afternoon sun can be a real shot killer, making it nearly impossible to get those musicians in its direct path.

Favorite venue to shoot:
I don't know if I can narrow it down to one particular place that I like to frequent for my photography. When it was running at full throttle under Skip Norris's direction, Detroit's Jazz Cafe was a great place to shoot. I also love to hang out at Smoke in NYC. 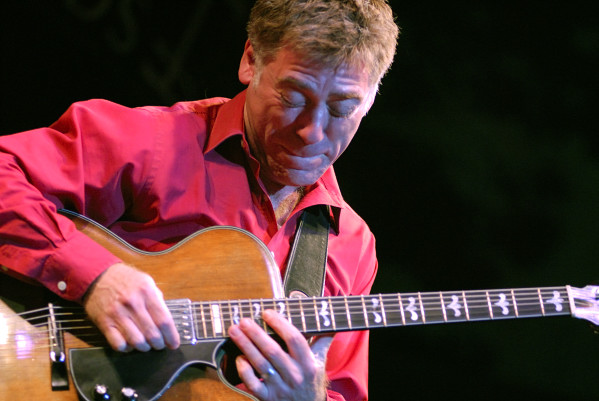 Favorite festival to shoot:
Not that I have been all over the world shooting at various festivals, but the Detroit Jazz Festival on Labor Day weekend has always been a favorite for me. I've been attending the festival every year for over 20 years and have been covering it for about the past ten or twelve years.

Where was your first assignment location?
My earliest work shooting jazz musicians was at the Detroit festival with a point-and shoot camera from behind the gates and fences. A few years later, I was able to score a photo pass and had my F3 and F4 in tow. I have always found it be be a challenge, but also very exciting. Over the years I have been thrilled to find my work appear in many places, including Down Beat, The New York Times,and a multiple page spread for the Japanese magazine English 4U.

Your favorite musician(s) to photograph:
I never tire of shooting drummer Matt Wilson. He always gives so much of himself in every performance and that always translates to the photographic medium. I have a large file of favorite Matt shots. 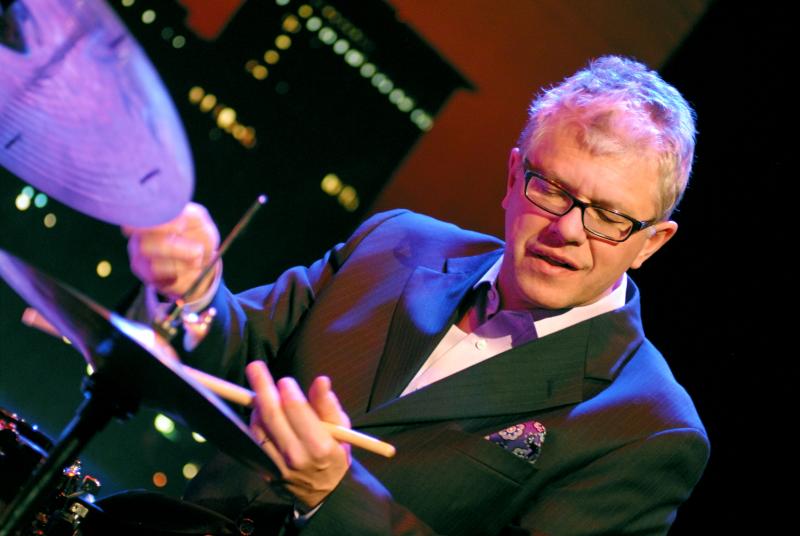 Did you know...
The summer before my senior year in high school, I traveled out west with my mom and dad in a van. We spent 30 days hitting all the big attractions such as The Grand Canyon and Mount Rushmore. We carried a large and dedicated cooler just for the massive amount of Kodachrome that I took with me. I shot constantly, but over the course of the entire vacation, I only took one picture of my mom and dad. As I said before, I never was much for people pictures. Go figure.

Your favorite jazz story:
My favorite times were spent in the late '80s and early '90s hanging out with David 'Bubba' Brooks and Bill Doggett at the Theatrical in Cleveland. Not only did I shoot the band, but I also sat in playing drums on more than one occasion. Bubba often talked of his brother Tina Brooks. He had tons of stories about Blue Note Records and Alfred Lion. He also talked of playing with Don Pullen, one of my all-time favorites, who always called him "Bricks." I think my favorite story was the one about how the Brooks family met Thelonious Monk one afternoon. They lived in Fayetteville, North Carolina and on one particularly hot summer day, there was a knock at the door. When Mrs. Brooks went to see who it was, she saw Monk standing there with a thick wool topcoat on and a knit hat on his head. Monk asked to talk to Tina. With that, Mrs. Brooks went back inside and announced that there was some "crazy man" on the porch asking for Tina. After all, it was nearly 95 degrees outside and here's Monk with a wool topcoat. Bubba took a peek and realized it was Monk, but had to do a bit of work to calm his mother down, since she was convinced he was up to no good.

View more C. Andrew Hovan photos at All About Jazz