Tenor saxophonist Tina Brooks was one of the unsung geniuses of the horn, a brilliant soloist with a pure, smooth tone and a mind that created patterns of great intricacy, logic and beauty. Almost his entire output as a sideman and leader was for Blue Note. His obscurity was a tragedy for the music as well as for him.

Harold Lloyd “Tina” Brooks and his twin brother Harry were born to David and Cornelia Brooks in Fayetteville, North Carolina, on June 7, 1932. They were the youngest of eight children. This close-knit family migrated en masse to the Bronx in New York City in 1944, when Harold was 12 years old. He was already being called Tina (pronounced Teena), a grade school nickname that came from his tiny or teensy size. Around this time, he started playing the C Melody saxophone. In addition to school instruction, he took private lessons with his older brother David Brooks Jr., whose nickname is Bubba. Tina moved from C Melody to alto and finally settled on the tenor as his instrument.

Meanwhile, Bubba was becoming established as an R&B tenor saxophonist. In 1950, he joined pianist Sonny Thompson's band. When he took a leave of absence in late 1950, Tina took his chair for a few months. In January of '51, Tina made his recording debut on one of Thompson's many King sessions done in Cleveland.

Throughout the early fifties, Tina worked with local New York Latin bands and various R&B outfits such as those of singer-pianist Charles Brown and trumpeter Joe Morris. In '53 or '54, he went on the road with pianist Amos Milburn. He then joined Lionel Hampton's orchestra for the spring and summer of 1955. But he found this to be little more than another R&B gig with little room to stretch out.

In 1956, Brooks met trumpeter-composer Little Benny Harris at the Blue Morocco, a Bronx jazz club. Harris took the young tenor under his wing and taught him the vocabulary and intricacies of modern jazz. Tina also developed a close friendship with the brilliant pianist- composer Elmo Hope. He was assimilating early influences (Lester Young, Dexter Gordon, Charlie Parker, Wardell Gray) and current models (Sonny Rollins, Hank Mobley) into a style of his own, which was rapidly taking shape.

Alfred Lion remembers Benny Harris calling him up to a Harlem club to hear Tina in late 1957. He immediately began recording Brooks on Blue Note at a regular pace. He first hired Tina for a marathon Jimmy Smith recording on February 25, 1958. The tenor saxophonist played on three lengthy sextet tunes. “The Sermon,” and “House Party,” two of Smith's most important and popular albums, each carried one of those tunes. When Blue Note recorded the organist at Small's Paradise that April with special guests (a session that was not issued until 1980), Tina was present.

On March 16, Lion gave Brooks his first recording date as a leader. For whatever reasons, that excellent session sat in the vaults until 1980 when it was issued briefly in Japan as “Minor Move.” In May of '58, Tina and Junior Cook were the tenor players on Kenny Burrell's all-star “Blue Lights” session. Then, fifteen months passed before Brooks recorded again on a specially planned Blue Note live recording led by Burrell at the Five Spot. Through his association with Blue Note, Tina met another great and underrated tenorman: Ike Quebec.

It was Ike Quebec who introduced him to Freddie Hubbard: "Ike Quebec introduced me to Tina at the 845 Club. Ike also introduced me to Alfred Lion. I loved Tina. He had a nice feeling. I got into him before I got into Hank (Mobley). He would write shit out on the spot and it would be beautiful. He wrote "Gypsy Blue" for me on the first record and I loved it. I just loved it. Tina made my first record date wonderful. He wrote and played beautifully. What a soulful, inspiring cat. I loved him."

Freddie's session took place on June 19, 1960. And Tina did play beautifully. He also wrote "Open Sesame" and "Gypsy Blue" and arranged "But Beautiful." Exactly one week later, Tina made his second album “True Blue,” and Freddie Hubbard was the trumpeter. Both albums were released that fall.

During 1959 and '60, Tina was the understudy for Jackie McLean in Jack Gelber's play “The Connection,” which was presented by The Living Theater. The pianist, composer, and musical director was Freddie Redd. This association led to three more Blue Note dates. Both McLean and Brooks were on two Redd sessions. Under McLean's leadership, Tina played on and wrote three of the six tunes ("Medina," "Isle Of Java" and "Street Singer") for a wonderful sextet date. For McLean's next album, “Jackie's Bag,” Blue Note decided to pick the best of this and an earlier recording date, so only half of the sextet pieces were issued. The complete session was finally issued in Japan in 1979. Seven weeks later, Tina went into the studio with the same sidemen that appeared on the McLean sextet date to make his third Blue Note album. Since one tune, "David The King," never made it to releasable quality, an album was assembled from the session which borrowed "Street Singer" from Jackie's date. The album was titled “Back To The Tracks” and given the catalog number 4052. It's cover appeared on inner sleves, and it was listed in Blue Note catalogs for a time. Yet the album was never issued. This is one of about a dozen such instances in Blue Note's history. Yet a fourth Tina Brooks album was recorded in 1961. It was edited and sequenced for release. It too was not issued.

Tina Brooks never recorded after mid 1961. Throughout that decade, he picked up occasional Latin and R&B gigs, but primarily he worked around the Bronx at such clubs as Freddie's Bar, the 845 Club and the Blue Morocco with Oliver Beener, Elmo Hope, Don Pullen and many others. His work was a moving force that inspired younger Bronx musicians like trumpeter Charles Tolliver and drummer Barry Altschul. Perhaps part of the reason that he never attained fame of any sort was his shy, reserved personality.

Tina was also one of many who had a chronic drug habit. The inevitable short hospital and prison stays would keep him off the music scene intermittently. Tina Brooks died on August 13, 1974 of kidney failure or, as Beener put it, 'general dissipation.' He had been very ill and unable to play the saxophone for several years.

Tina Brooks was a magnificent talent who was among us all too briefly. He was a unique, sensitive improviser who could weave beautiful and complex tapestries through his horn. His lyricism, unity of ideas and inner logic were astounding. Far lesser talents have been far more celebrated. 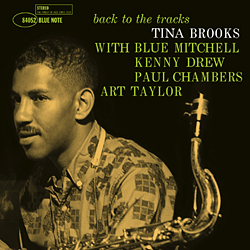 Back To The Tracks 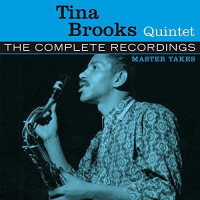 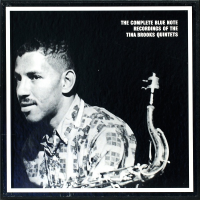 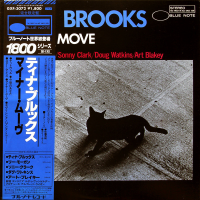 All About Jazz musician pages are maintained by musicians, publicists and trusted members like you. Interested? Tell us why you would like to improve the Tina Brooks musician page.