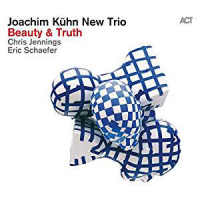 German born pianist/composer Joachim Kühn is not without a global following though it's a shame that he is not more widely recognized in the US. Having spent much of his professional life in Paris, he did occupy some time between, residing in California. His musical interests are as broad as the roster of top-tier artists he has worked with in his earlier career, including Archie Shepp, Ornette Coleman, Michael Brecker, Joe Henderson and the recently departed Larry Coryell. Showing his affinity for classical playing, he worked with the Hannover Radio Philharmonic Orchestra in the mid-1990s, teaming with Alfred Mangelsdorff and Django Bates.

Kühn's trio outing, Beauty & Truth, comes just about forty years after his debut recording Charisma (Atlantic, 1977). The senior statesman has always had a style that isn't easily defined but it can be as lyrical as it can be restive and genre is a non-starter in analyzing Kühn's approach. He takes a page from Tomasz Stanko's book in surrounding himself with the new breed of artist. Canadian bassist Chris Jennings, having relocated to Paris, plays with guitarist Nguyên Lê and has worked with Danny Gottlieb, Paul McCandless, Rudresh Mahanthappa and Tigran Hamasyan. Drummer Eric Schaefer works with a number of European groups and has appeared on a dozen albums.

Beauty and Truth opens with the title track, a very brief tribute to Coleman, performed as a piano solo. Jennings' bass unexpectedly walks us into The Doors' "The End," familiar at first before taking an improvised detour more reminiscent of the Esbjorn Svensson Trio. A Kühn original "Because Of Mouloud" takes a decisively edgier approach as the pianist's right hand shows no sign of having slowed. An Eastern ambience sets "Sleep On It (Stand High Patrol)" off from the previous themes. Later in the program, the trio takes on George Gershwin with "Summertime," managing to keep the over-recorded piece fresh with some inventive twists. The trio returns to The Doors with "Riders on the Storm" proving that the Morrison/Krieger/Densmore/Manzarek combo had a bit more going on that might have been apparent to its following. Kühn again channels Stańko—at least from a musical preference perspective—with two Krzystof Komeda compositions, "Sleep Safe and Warm" and "Kattorna." The set closes with Gil Evans' "Blues For Pablo," the longest piece on the album, giving the trio time to stand out as individuals.

Those unfamiliar with Kühn's work would be well served to look for those earlier—and sometimes harder to locate—projects with Coleman and Shepp. But much of the true scope of his talent is right here, on Beauty & Truth, where he can be appreciated both as a soloist and group member; a writer and a translator. The unusual selection of Kühn's own compositions and those from contrasting sources, does much to illustrate his deep insights and creative characteristics. At seventy-two years of age, it appears that Kühn remains a restless musical pioneer.

Beauty And Truth; The End; Because Of Mouloud; Sleep On It ( Stand High Patrol); Intim; Transmitting; Summertime; Riders On The Storm; Machineria; Sleep Safe And Warm; Kattorna; Blues For Pablo.