Home » Jazz Articles » Rich Halley 4: Back From Beyond

By Dan McClenaghan
June 8, 2012
Sign in to view read count 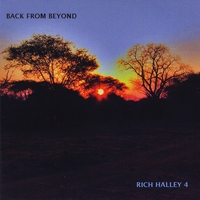 Tenor saxophonist Rich Halley can be relied upon to rip it up, either live or in the studio. His forte is free jazz that always seems to threaten to power into some steroidal bebop. He has released a string of fine records on the now-dormant Louie Records—including, perhaps the best of these, the no-holds-barred The Blue Rims (2003), with a piano-less quartet that included cornetist Bobby Bradford, who also played on saxophonist/free jazz pioneer Ornette Coleman's considerably expanded reissue of 1971's Science Fiction, The Complete Science Fiction Sessions (Columbia Records, 2000). With muscle and beef in the league of fellow tenor men Sonny Rollins and Dexter Gordon, Halley has charted his own path, pushing free jazz in his own direction, usually with a gale force wind.

Back From Beyond finds Halley, again, in fine company, sharing the frontline duties with trombonist Michael Vlatkovich, whose style is also powerful and in-your-face. Bassist Clyde Reed—a veteran of Halley's groups—possesses his own unique firepower approach, whether he is laying down a solid groove or setting off sparks with the bow, as he does on the set's longest cut, "Solanum."

The set opens with the hearty stew of "Spuds," featuring Halley's trademark ursine tenor growl interjected with Vlatkovich's elephantine trombone, giving way to a relatively sedate bass/drum duet. Carson Halley, in the drum chair, drives the music forward with rock music intensity as the horn men blow back in, careening with a joyous, don't-mess-with-me abandon.

"Section Three" trudges into existence on a solid groove and two-horn harmonies. The mood is introspective, in a blaring, car-horn sort of way, as Halley and Vlatkovich converse with bold declarative remarks that slip into the wailing end of the spectrum. The just-over-three-minute "Reorbiting—for Sun Ra" finds Halley playing with near-Lester Young smoothness, but with some real guts.

"Basalt" struts in with attitude, Halley and Vlatkovich blowing a sort of "march of the bad asses" intro that disassembles to freer flying and some of the disc's most inspired and fiery horn work.

Since the incendiary Coyotes in the City (Louie Records, 2001), Halley has been serving up a bold and brash brand of free jazz boiling out of the bop tradition. Back From Beyond pushes that sound further on up the road.