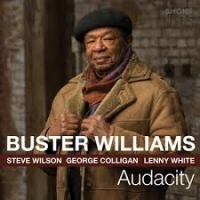 Generous is the key word here. Humble yet eminently assured of his ability, agility and legacy, Williams spans the decades from '69 with Herbie Hancock's jazz/rock Mwandishi sextet through contemporary stints with, to name just a few, Kenny Barron, Nancy Wilson, Steve Turre, and Denny Zeitlin. He gives his players so much that, upon first casual listening, one might suspect this was a Wilson or Colligan date. Both players cover wide ranges in service to Buster's tight composing, from the free blowing, opening fire of "Where Giants Dwell" to the tuneful and tender "Ariana Ani" and the ten-minute luxury that is "Briana." Colligan's bright touch is particularly illuminating on the ballads (as is William's delicious solo on "Briana") and downright post-bop hard on the free-wheeling numbers that make up the bulk of the disc. White's incisive "Stumblin'" more than compliments the leader's energetic compositions with Wilson blowing long, Colligan comping wildly, and Williams displaying the resilient, earthy tone that has long been his calling card.

"Song of the Outcasts" shifts easily from exotica to the more mainstream, led this time by White (who unfortunately seems too low in the mix from time to time) and given flight by Wilson's crystal-clear, winding soprano. William's heart-racing "Triumph" and Wilson's equally infectious "Sisko" just make Audacity truly one of the highlight recordings of the new year, and a true celebration of the bassist's 75th year. Here's to many more!