This article was first published at All About Jazz in May 2002. Upon joining The John Scofield group in the mid '80s it seemed like drummer Bill Stewart just appeared out of nowhere. Of course, Scofield and Stewart did a number of tours and studio dates together while word got around about Stewart's unique sound and approach to the kit and music. More recently an extensive, high profile tour with Pat Metheny's trio project brought his name to ...

From the 1995-2003 archive: This article first appeared at All About Jazz in May 2002. Upon joining The John Scofield group in the mid '80s it seemed like drummer Bill Stewart just appeared out of nowhere. They of course did a number of tours and studio dates together while word got around about Stewart's unique sound and approach to the kit and music. More recently an extensive, high profile tour with Pat Metheny's trio project brought his name ... 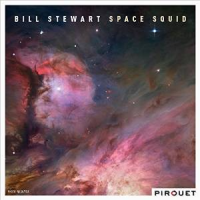 The musicians that appear on Space Squid only played one gig together as a band before recording this music, but the connections were there prior to that performance and studio session. Drummer Bill Stewart's relationship with pianist Bill Carrothers and saxophonist Seamus Blake extends back some two decades. Both men appear on Stewart's Telepathy (Blue Note, 1997), and Stewart has appeared on a number of each of their albums. Bassist Ben Street hasn't been in Stewart's orbit as long as ...

Funk and jazz drummer Bill Stewart brings an unusual format to this effort. The use of piano and Hammond organ completes his trio, with Stewart offering a series of challenging compositions. Incandescence is indeed an appropriate title for the album, as it exudes a glowing-with-heat ambiance.

Stewart's long stretch with guitarist John Scofield's group provides a basis for his heavy funk drumming, and his choice of associates reflects it. Larry Goldings has risen to near the top of today's jazz ...

Best known for his work with guitarist John Scofield, drummer Bill Stewart has avoided the straight and narrow in favor of a more exploratory path. Although Stewart's output as a leader has been limited by his various sideman duties, his solo work is consistently inventive, combining idiosyncratic writing with agreeable rhythms.

A tasteful stylist who favors melodious polyrhythms and colorful accents over pyrotechnics, Stewart has been recruited by a number of high profile artists. In addition to Scofield, ...

Sometimes it's the more unusual releases that yield the most pleasant surprises and such is the case with Bill Stewart's Incandescence. The seasoned drummer has been the percussive impetus for saxophonists Maceo Parker, Michael Brecker, guitarist John Scofield and one of today's premier B3 organists, Larry Goldings (who appears on this release). Stewart has a number of recordings as a leader, but now has a few tricks up his sleeve with the unusual trio setting of piano, Hammond organ, and ...

At his trio's first gig on their second European tour, Bill Stewart opened the show by telling us how happy he was to be back at the Copenhagen Jazzhouse, “one of the best jazz clubs in the world." Not a bad compliment!

Organist Larry Goldings and pianist Kevin Hays have, just like Bill himself, been involved in many projects on the American jazz, fusion and funk scene. ...