ART: Why I Stuck with a Junkie Jazzman by Laurie Pepper 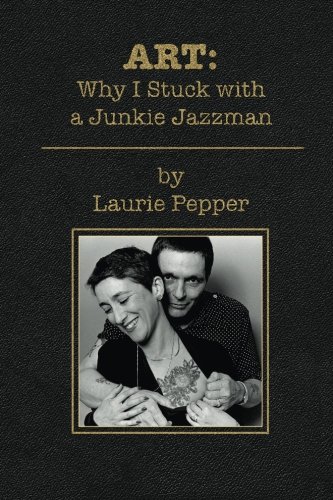 About two-thirds the way through her memoir, ART: Why I Stuck with a Junkie Jazzman Laurie Pepper plants her spear in the dirt and declares the obvious:

"A question I ask myself is if Art hadn't had me there constantly assessing his mood, taking his aesthetic temperature, would he then have had to push his vision by himself"? I think somebody else, another friend or lover, might have done it...But what matters here, to me in my story, is that it was me who paid attention and was listened to. I played an important part in this and other projects of undoubted value and knew it at the time and was thrilled and am proud now."

And it is about time.

Thirty-five years after the original publication of Straight Life: The Story of Art Pepper (Da Capo, 1994, revised edition) and nearly as long after the alto saxophonist's early death at 56, Laurie Pepper has finally put a fine point on a hard truth, though, I think she sells herself short in her belief that someone might have been there to hold Art Pepper's hand and accomplish what she did. That is unlikely. In Straight Life and the present text, Art Pepper did not demonstrate the life skills necessary to manage the logistics of the Village Vanguard or Maiden Voyage sessions on his own, much less the international tours. This is not judgment, only a statement of apparent fact. It took his delivery to these events to see them through to their success and Laurie Pepper was responsible for that...exactly.

Art Pepper could have just as easily suffered the same neglect that killed Bud Powell or taken the path of least resistance to a sordid end as did Chet Baker. Instead, Laurie Pepper provided an environment where the saxophonist ultimately thrived and produced only music of the highest quality (as opposed to Baker, who recorded promiscuously until the end, producing many unlistenable performances).

By the standards of today's faux-confessional reality television's (A&E's Intervention or TLC's Addicted) tidy millennial reductions, Laurie Pepper could have be held responsible as enabling her husband's addictions (as well as her own). But, things were not so clear in the 1970s, and the thought of treatment-resistant chemical dependency was and is something, while acknowledged, ill-considered and under-reported today...no matter how much Drew Pinsky natters on about it.

What Laurie Pepper enabled was a behaviorally-difficult, emotionally stunted genius to take root and flower late, producing art of enduring beauty and significance. This book has Art Pepper mentioned in it, but it is not about him. It is about Laurie Pepper and what she has to teach us about life on its own terms and that one does not merely wish to endure, but ultimately prevail.

Laurie Miller's story begins with a Sylvia Plath-suicide attempt that did not progress fast as desired. This ultimately led to her track to Synanon where she was to meet the elephant in the room that would eclipse her in Straight Life. What Laurie Pepper adds in her present memoir are glimpses of her Russian-Jewish heritage and parents with a serious Trotsky bent when such would have not been so popular... Revealed is her daughter Maggie, and her abandonment, and an ex-husband and a slightly-off new wife offering the dirty paucity that life often offers as its consolation to an exiled mother who ultimate prevails. It is a sweetness that cannot be properly enjoyed, but Laurie Pepper puts it into such perfect perspective that it is easy to believe her conclusions later in the book.

Regarding the Art Pepper sections, Laurie Pepper concentrates more here on her motivations and fears and how these influenced her decisions, and they can be read in parallel with the same events accounted for in Straight Life. Her writing is strikingly different from that in Straight Life. Again, this is because of a change in focus: to the person behind the curtain in Oz rather than Oz himself and nearly near 40 years of experience between then and now. Casual honesty is the best way to describe Laurie Pepper's delivery of the conflict, the frustration and triumph of 1975 to 1982. But there is no end there. Damaged men cannot write this way, no matter how bad the politically correct wish it were so.

Laurie Pepper's descriptions of the aftermath of the saxophonist's death are heartbreaking, but not as powerful her all too brief description of her own mother's evaporation to Alzheimer's disease. After caring for Art Pepper at the end of his life, Laurie Pepper sounds rightly prepared for the desolation of her mother's passing. Is Laurie Pepper's book about music?

But Laurie Pepper brings the reader to a level of empathy and understanding that is both personable and amiable and lacking in any competing account. It is as if we are having tea with her one afternoon, sharing similar experiences in some synergistic way that only like-kind souls can.

During her cathartic coda, Laurie Pepper again becomes nakedly candid about her feelings and motivations:

"Reader, I'm going to tell you here, point blank, what ought to be implicit in all the rambling pages that have gone before: Everything that has happened to me, what I saw and heard, and all the ways I felt, if I will try to remember them completely, that is my wealth. The so-called good experiences and the so-called bad ones are what I have... ...What I am trying to say is that when I write I find my life in memory, multifaceted, complete, waiting to amaze me, my own treasure."

In between the ellipses, she shares both an incredibly painful and stark life episode juxtaposed against a youthful, innocent and sensual experience, finally equating the two experiences in a summation of her troubled and brilliant husband:

"At his best, Art found beauty in everything, even in harshness, pain, and violence. And in his music, if you pay attention, you can hear the promise. The promise is the moment of a held breath when you know, you know it is all beauty and you are reconciled with your existence in this world."

It is all beauty and you are reconciled with your existence in this world. indeed.

That, fair reader, is perfect humility and acceptance. No amount of pop psychology or 12-step syllogism will bring one there: Only self-realization.

The photograph of Laurie Pepper, taken in April 2014 by one Hugh Kenny (who is a story unto himself, if briefly, in this memoir), that closes is tome, shows a graceful beauty, still youthful in short hair and overalls, reflecting the joy of a satisfied spirit with shining eyes and an easy smile...reconciled with her existence in this world.