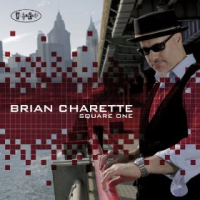 It is said that imitation is the sincerest form of flattery but that can be a double edged sword with respect to self-expression and individuality. Reverence to past influences such as the pioneering organists Larry Young and Jimmy Smith is commonly heard in many contemporary jazz organ players including New York based Brian Charette who breathes originality in 2014's The Question That Drives Us (SteepleChase) and particularly 2012's Music for Organ Sextette (SteepleChase). Both feature that iconic Hammond B3 sound within a larger ensemble mashing up a progressive blend of jazz and chamber music influences.

But the trio setting is the standard by which jazz organists are measured and with Square One Charette teams with guitarist Yotam Silberstein and drummer Mark Ferber further proving why he was voted 2nd place in 2013's Downbeat Critic's poll for "Rising Star: Organ." His technical facility of the instrument is immaculate while sporting an impressive tonal range with plenty of pizazz as captured in the opening track "Aaight!"

It's an infectious piece dedicated to Charette's fellow sextette member and saxophonist Mike DiRubbo who would frequently utter the phrase "Aaight!" (Colloquial term for "All Right") at the end of a gig on his way home. Charette delivers the funky hook while Ferber and Silberstein add rhythmic hot sauce to the bait resulting in what is effectively an old-school dance joint that will make you wanna get up and shake your groove thang.

It quickly settles into the pocket moving through unison lines then tight solo trades splashed with Silberstein's Wes Montgomery-like chording and Charette's skittering fingers working in-tandem with a purposed bass pedal. About midpoint through the piece Charette's modulation travels from the barstool to the church pew with a gospel church organ sound that's performed with fluid maneuverability and consummate touch.