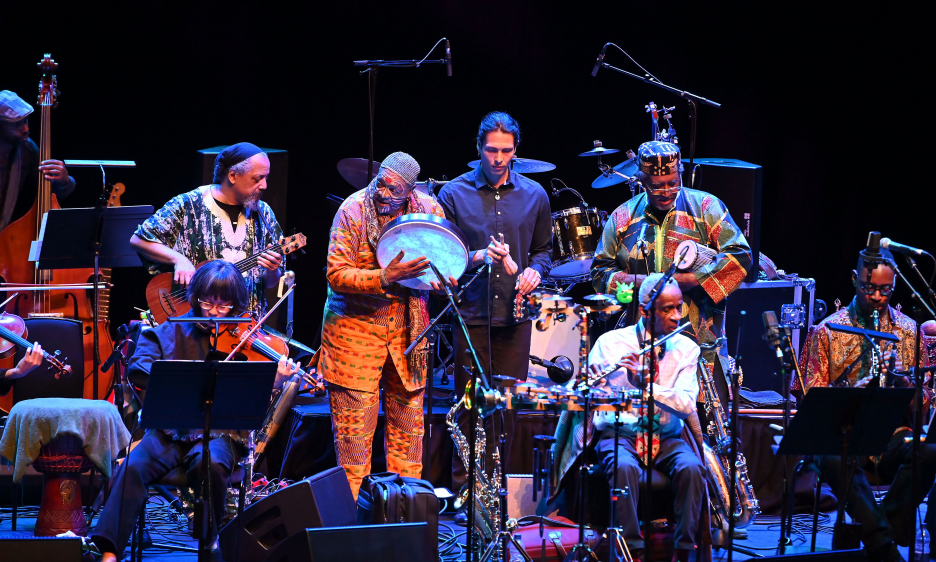 There is nothing in the rule book which says that a band celebrating its 50th anniversary must avoid new material and instead trawl through its back catalogue. And in any case, the Art Ensemble of Chicago (AEC) threw away the rule book the day it began playing. The band's founding mission-statement was to perform "Great Black Music, Ancient to the Future" and it ignored genre boundaries and the border police and pioneered an uplifting mix of bop, hard bop, doo wop, swing, gospel, blues, r&b, New Orleans traditional, highlife and free jazz.

During its first decade, the AEC was defined by five musicians: reed players Roscoe Mitchell and Joseph Jarman, trumpeter Lester Bowie, bassist Malachi Favors and drummer Famadou Don Moye. Of that quintet, only Mitchell and Moye are still with us. Tonight at the Barbican, they were part of a 13-piece line-up augmented for the occasion by the British saxophonist Shabaka Hutchings and South African cellist Abel Selaocoe, who proved to be among the stars of the show.

The AEC served notice early in 2019 that it would not be marking its anniversary year by simply running through its greatest hits. We Are On The Edge (Pi Records / Erased Tapes), the band's first release in 15 years, rings the changes by featuring a string quartet, an electronicist and performance poet Moor Mother leading a three-piece vocal section. The album (a double) acknowledges the past with new arrangements of some earlier material, but focuses on breaking new ground.

The Barbican set list and band line-up were drawn in large part from We Are On The Edge. The string quartet was expanded to a septet: three basses, two cellos, viola, violin. There was no electronicist—the sole electric instrument on stage was a bass guitar, used only in the encore—and Moor Mother and the other vocalists were replaced by cellist Abel Selaocoe. In two extraordinary passages, Selaocoe was showcased singing in a style which sounded like a combination of traditional South African vocalising and Tibetan throat singing.

Like the album, tonight's performance may not have struck a deep chord with all longtime AEC fans, although it was well received, and there were undeniable longueurs during the first 80 minutes, particularly during the string-section-only first quarter-hour. This resembled a perversely prolonged tune-up and was about as interesting to listen to as paint is to watch drying. But the performance, which was presented without breaks as one continuous and mostly abstract piece of music, struck gold during Shabaka Hutchings' fierce extended solo, accompanied by urgent drums and percussion, Abel Selaocoe's passionate and otherworldly vocalising, an unaccompanied sopranino saxophone workout from Roscoe Mitchell, and an all-too-brief deep-groove section featuring the three bassists arco-riffing alongside Simon Sieger's tuba.

Old-style AEC surfaced during the final piece, "Odwalla" (from the 1973 Atlantic album Bap-Tizum), arranged tonight to sound like Art Blakey's Jazz Messengers with a string section (a genius idea), and the encore, "Funky AECO" (from the 1985 ECM album The Third Decade). Given the applause which greeted both numbers, some people in the audience would likely have welcomed more in the same vein. Others will congratulate Mitchell and Moye for continuing to explore new territory, even after all these years.