Accent: Christmas All the Way 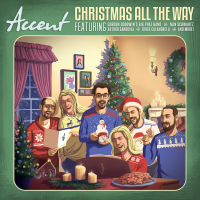 A rhetorical question: what makes a great Christmas album? We know all or most of the chestnuts, both commercial and religious. The Drummer Boy flams, someone's dreaming white, and another will be home in their dreams. The annual marathon Yuletide programs rely heavily on the tried and true with an occasional novelty thrown in. Classical purists hit up the legit pantheon. With this album, a capella vocal group, Accent adds a Who's Who of world-class arrangers (Jorge Calandrelli, Nan Schwartz, Elliot Deutsch and including group members James Rose and Simon Åkesson), celebrated musicians (including Arturo Sandoval), and takes the obligatory jazz Holiday album to an invitingly unique level the appeal of which is infectious.

The award-winning, internationally-based six-member vocal group offers predominantly standard red-white-and-green fare here, but the performances across the session are sublime. Thick a capella harmonies and undulating contrapuntal lines for which Accent is known flow from cut one, "Christmas Carol Medley." The resonance of "I'll Be Home for Christmas" and the "The Christmas Song" bring a jazz-flavored hot-toddy to those vintages. The Burl Ives-associated "Holly, Jolly Christmas" get a hip-hoppity remake with a street-wise, soulful George Shelby tenor sax solo. In a brilliant production touch to the sextet's soloing, additional ensembles join in the party—Gordon Goodwin's Big Phat Band, for a hard swinging-singing "It's the Most Wonderful Time of the Year" and "Let it Snow! Let it Snow! Let It Snow!," featuring a torrid solo from Arturo Sandoval, and the Budapest Scoring Orchestra, the Estonian Voices ("Winter Winds") and a barbershop quartet. In an acknowledgment of international holiday fare, the serenely beautiful Swedish song, "Jul Jul Strålande Jul" and the French carol "Petit Papa Noël" offer potential new Yule "standards." The reason for the season is celebrated with Nan Schwartz's and JB Craipieu's gloriously dramatic "O Holy Night." The track is stunning and a literal nightcap on the date.

Make no mistake, this is a jazz-flavored album by a crew whose talented vocal tendrils dive deep back in time to the classic recordings of the Hi-Los, the Double Six of Paris, and the more classically-flavored, Swingle Singers, while yet enhancing the style with contemporary voicings, chord movement and ear-catching counterpoint.

Christmas All the Way is a standout. There's a youthful, engaging ambience here—a more optimistic musical outlook that invites, seduces and peers brightly ahead. It's a solid bet that Santa keeps this one for himself. Go ahead and beat him to the punch.