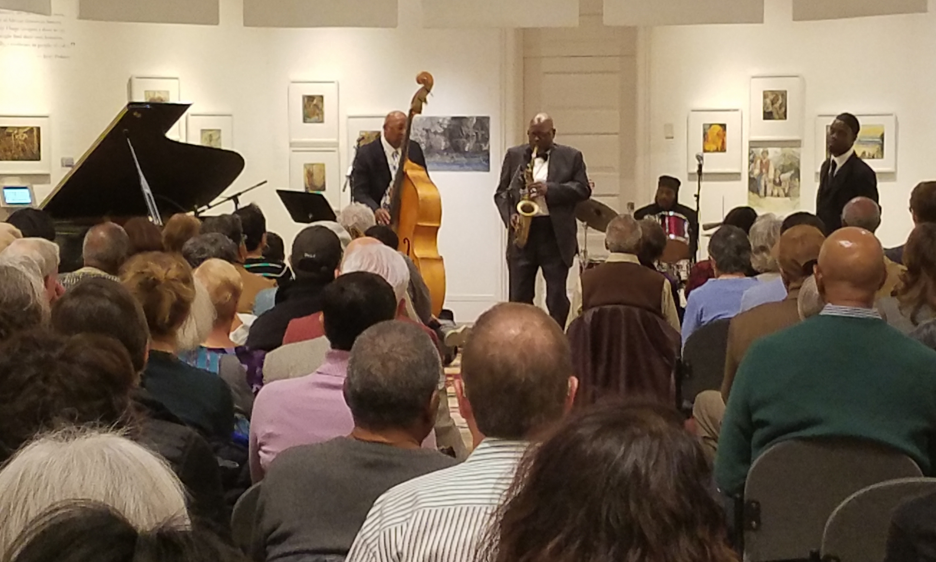 The Arpeggio Jazz Ensemble occupies an almost legendary status in the Philadelphia jazz scene, and their ongoing jazz series at the Woodmere Art Museum in the outer stretches of Chestnut Hill has kept full house audiences captivated for the better part of a decade. The leader and bassist, Warren Oree, has created programs designed to entertain and educate audiences, convey a message, and appeal to all generations. In this concert, they focused on the music of bebop masters Charlie Parker and Dizzy Gillespie in a way that was fast and furious, challenged the musicians, and enthralled the audience.

The rise of bebop in the 1940s was one of the most remarkable developments in the history of music, featuring "songs characterized by a fast tempo, complex chord progressions with rapid chord changes and numerous changes of key, instrumental virtuosity, and improvisation based on a combination of harmonic structure, the use of scales and occasional references to the melody... Bebop musicians explored advanced harmonies, complex syncopation, altered chords, extended chords, chord substitutions, asymmetrical phrasing, and intricate melodies" (Wikipedia). Jazz was never the same after that. Unlike swing, which always carries a nostalgic note, bebop sounds as fresh today as when it was created. It is alive and fully present in the now. The motto, "Bird Lives," scrawled on walls all around New York by the beat poet Ted Joans, carries more than a mythological meaning; his music continues to challenge and inspire musicians, almost as if he were in the room with them. So you could have gone to a concert in L.A. in the 1940s, and it would have carried the same feeling as this one.

The first tune the group played, Jerome Kern's "All the Things You Are," is not a bebop tune at all, but Gillespie wrote an intro that players have used ever since, and the chord changes fit with bebop's improvising agendas. Gillespie's "Groovin' High" was perhaps the first bebop "hit tune" (1945), a contrafact (same chord progression) of Paul Whitman's "Whispering." The Arpeggio group took it considerably faster than the Gillespie/Parker version, giving trumpeter Will Wright and saxophonist Larry Price opportunities for flash drive improvising that recurred throughout the evening. Sometimes, the pace seemed a bit rushed, but both horn players displayed wicked mastery of the bebop idiom, staying right on track with the complex chord progressions. "Whatever Lola Wants" is a popular music tango of the time, but was covered by jazz vocalists, most notably Sarah Vaughan. To take it as a bop tune seemed a bit of a stretch, but it gave pianist Jim Holton an opportunity for a brilliant improvisation, which often happens when a musician is given a ridiculous song to play (LOL!!)

"Parker's Mood" a beautiful blues composed by "Bird," gave saxophonist Larry Price a chance to show his pellucid style of ballad playing. Appropriately, he made no attempt to imitate Parker, instead displaying his own way of carving out an improvisation with perfect attention to detail and a vibrato-less sound for the ages. Price came to Arpeggio when their long-time saxophonist Umar Raheem, had to put down the instrument due to Parkinson's disease. (A fund-rasing concert for Raheem was held in Powelton Village two days later.) Price spent over a decade in Finland, performing and teaching around Europe before returning to Philadelphia. He has acquired a refined and sophisticated sense of the music that is rare.

Art Blakey once recalled that Gillespie composed "A Night in Tunisia" on the cover of a garbage can somewhere in Texas, suggesting how jazz standards sometimes are created on a moment's notice and in desperate circumstances. Trumpeter Will Wright made no bones about outdoing Gillespie, sailing all over the registers of the instrument with free-flying riffs and phrases. Oree took a creative and attention-getting bass solo, with long breathtaking pauses between the notes (another bebop innovation), an idea that seemed to come from Thelonious Monk, who was one of the bebop innovators at Minton's Club in Harlem, for which he has never received full recognition. Oree, who often displays an entertainer's rapport with the audience, got the crowd singing the call and response "Salt Peanuts" that became a signature tune for Gillespie at Jazz at the Philharmonic and around the world. This song initiated the quintessential bebop hesitation on the backbeat which in its own way was a rhythmic critique of the sentimentality of swing and which gave musicians food for thought for years thereafter.

"Donna Lee," one of several tunes claimed by Miles Davis to be his authorship, but it is usually attributed to Bird, and it is a prototype of the bebop contrafact, with the chord progression of "Back Home in Indiana." It is a fast-moving tune that has stimulated numerous improvisations, notably by Parker himself as well as Clifford Brown, who outdid himself on this tune and "Cherokee." Oree called for solos from all members of the group on this one, and all delivered with panache.

"Con Alma" is one of the most beautiful of all ballads, a Gillespie composition of restrained passion, sheer poetry in music. My favorite version is by Oscar Peterson, who kept it simple and sustained, the way it should be played. The group messed around with this tune a bit too much for my taste, frequently losing contact with the melody. But Wirght came through with a flugelhorn solo that dd caputure the essence of the melodic line, and Price stepped in with his well-shaped lines.

The concert concluded with "Yardbird Suite" a Parker classic that was never a suite at all, but perhaps part of a series of sections he had in mind when he wrote the tune. Price played a stunning solo in a rare modal form, and "Ju Ju" Jones took a sharply delineated drum solo that referenced the playing of one of the first and greatest bebop drummers, Kenny Clarke.