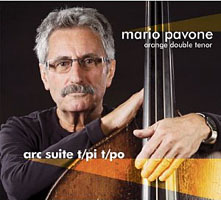 This release is something of a milestone for bassist and leader Mario Pavone. Now in his 70th year, he's also in his 45th year in music, which in a lot of cases would understandably mark a slowing down or restatement of established values. But Pavone is nothing if not forward-looking. So while looking back to the 1960s for inspiration for this music, he's succeeded in putting together a program alive with contemporary values.

In order for this to happen, he's been judicious in his choice of sidemen. With the exception of trumpeter Dave Ballou this is the band that breathed such potent life into his previous release, Ancestors (Playscape, 2008). The perfect marriage of band and composer-leader is apparent on "East Ark," where the tenor saxophones of Jimmy Greene and Tony Malaby lend both depth and shading to the essential darkness of the piece, before Ballou turns in the kind of solo which summons up memories of Lee Morgan working in what was, for him, the rarefied setting of trombonist Grachan Moncur III's band.

What's also clear on "The Dom" is the degree to which Pavone's writing is cliché-free. The echoes of Thelonious Monk and, more pertinently, Herbie Nichols, are never more than faint on this one, when Ballou again gives the impression that he might have been working in this band and with this music for decades. Pianist Peter Madsen brings something to the blend as well—his accompaniment is marked by nothing as tiresome as the regular comp, whilst in solo he teases out implications of the writing which are anything but apparent. Indeed, such is the ease by which these guys collectively avoid all the notable precedents in post-bop small group jazz, that it raises the question as to why so few people manage it.

The rush of "West Of Crash" is a case in point, especially when Malaby, he of the slightly harder tenor sax tone, turns in a solo which nods not only to the tricky nature of the musical setting, but to the need for light and space as tools for telling musical communication.

In view of how far jazz/improvised music has come, carving out fresh territory in the small group area is a feat in itself, but Pavone and his group do it with aplomb. The result is fresh, invigorated, compelling music-making.