By JAKOB BAEKGAARD
September 2, 2015
Sign in to view read count 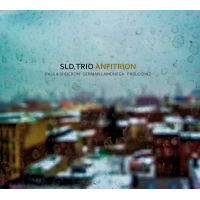 A piano trio without a leader? The concept is not unknown, but the norm in jazz is that a trio has a leader. Even pianist Bill Evans' trio with bassist Scott LaFaro and drummer Paul Motian, famous for dissolving the fixed hierarchy in a trio setting, was formally presented as the Bill Evans trio.

Behind the acronym SLD Trio hides three charismatic musicians: pianist Paula Shocron, bassist Germán Lamonega and drummer Pablo Diaz. Both Shocron and Diaz have released records as leaders while Lamonega is an established part of the blossoming Buenos Aires jazz scene. On their album Anfitrion, they play together as an organism. There is no leader, just three musicians finding a sound together, communicating through their instruments.

The album consists of six tracks and a suite divided into five movements. Each movement has a name like "R.C," "W.P" and "D.J" and the poet Steve Dalachinsky reveals the mystery behind the letters in his notes. Thus, "R.C" is the trumpeter Roy Campbell, "W.P" is the bassist William Parker and "D.J" is saxophonist Darius Jones. It is fascinating to hear this tribute to the American free jazz scene and identify the musical connections between New York and Buenos Aires.

A name that is not revealed in the notes is the person behind "C.M," but it must be pianist Cooper Moore. At least it makes perfect sense when listening to Shocron's exploration of the piano as an instrument that at times sounds like rolling thunder and a mysterious harp. Rhythms are played and whispered as Lamonega and Diaz take the music into unknown territory. Shocron even rambles Dadaistically on "Embudos" while Diaz cooks up a tribal rhythm. These musicians are indeed creating their own musical language, both swinging and abstract, melodic and dissonant, and it is as original and daring as the heroes they salute.