By Hrayr Attarian
September 2, 2015
Sign in to view read count 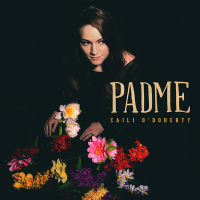 On her intriguing debut Padme pianist Caili O'Doherty showcases her superb skills as a composer, an improviser and a bandleader. The individual musicians' spontaneous expressions are integrated within the harmonic construct of her nine originals that comprise the album. As such the solos sound as natural extensions of the prewritten music making O'Doherty's freshman effort dynamically modern and vibrantly organic.

Flocks' passionate improvisation forms the core of the haunting and mystical "Prayer Song." Drummer Adam Cruz creates a tense ambience with his expectant beats while bassist Zachary Brown extemporizes with intense lyricism and a wistful and romantic touch. O'Doherty's contemplative, understated phrases weave a hypnotic and intelligent chant. The angular yet lilting group-play ushers in the evocative conclusion.

The electrifying title track features O'Doherty as she lets loose a shimmering cascade of crisp notes and clever melodic twists. In addition to this demonstration of virtuosity her thick, percussive chords provide buoyant support to guitarist Mike Bono's pensive and articulate thematic embellishments. Drummer Cory Cox's thunders and gallops form the vivid core of the song.

Despite being quite charming and soulful, the Latin tinged "Rose Baião" somewhat disrupts the conceptual unity of the record. Cox maintains a loose rhythmic framework while O'Doherty adds heady, rich tones with her swaggering Fender Rhodes. Altoist Caroline Davis' unhurried, lithe refrains shimmy with ardent sensuality and fluent wit within the limber cadence of the trio.

O'Doherty has a unique style that is rare in someone as early in their career as she is. Padme highlights, in addition to her ingenuity, a maturity that bellies her youth. The exquisitely forged, dramatic and darkly hued pieces not only stand out in their singular and splendid integrity but, with one exception, also fit together to make a bold artistic statement. The resulting disc is simultaneously accessible and provocative while avoiding both abstruseness and banality.