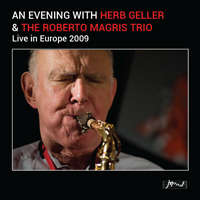 Italian pianist and bandleader Roberto Magris has been on dual trajectories in the past number of years. The first is his recent study of hard bop as evidenced by his recent J-Mood releases including Mating Call (2010), Morgan Rewind: A Tribute to Lee Morgan Vols. 1 & 2 (2012, 2013) and One Night in With Hope and More...Vols. 1 & 2 (2012, 2013). His second, sub-trajectory is the rediscovery of overlooked masters as in the release of Sam Reed Meets Roberto Magris: Ready For Reed (Jmood, 2013).

It is in Europe that Magris met up with Geller and became his rhythm section in the late period before Geller's death. An Evening with Herb Geller & the Roberto Magris Trio: Live in Europe 2009 is the result of some saved tapes and audio magic, displaying Geller in full possession of his facilities at 81-years old in 2009. Geller is captured closely, often revealing a dry, reedy tone that betrays the comfort of familiarity. A master of melody and the simple improvisation thereof, listening to Geller is like a relaxing walk down a path walked many times before.

Informative and razor sharp are Geller's comments between songs. He was not without opinions or his favorites, many that he paid tribute to here. Benny Carter's "Lonely Woman," Zoot Sims "Red Door" and Billy Strayhorn's "Orson" and "UMMG" are played emotively and with superb support from Magris and his crack trio. The pianist plays and leads beautifully, or more properly, allows Geller to do so.