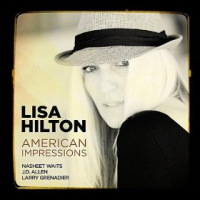 Complacency can threaten to creep into a musician's being without their knowledge as time passes, but the opposite seems to have happened with pianist/composer Lisa Hilton. Her early records dealt in friendly pastel colors delivered in relatively safe fashion, but she's become more daring as time has passed. Her playing has become more limber, loose, organic, fearless and moody, and her music has benefited from this growth, as it now possesses a greater balance between shadows and light.

Few things are more distinctly American than train songs and Duke Ellington, and Hilton does both justice before she's through. "Subway" takes the train theme to new places, as it deals with an appropriately subterranean hustle and bustle propelled by the leader's continuously seesawing line and Waits' broken patterns, while Ellington's "Echoes of Harlem" seduces as it moves atop Grenadier's carousel of a bass line.

Hilton is neither patriotic nor genre specific as she works her way through aural paintings of life scenes, but the sounds still speak to the very idea of the American experience. Bluesy undercurrents and battles between optimism and pessimism or consonance and dissonance are everywhere, but positivity and idealism win out in the end ("American Suite"). Along the way, the band moves from parched moodiness ("Too Hot") to floating elegance ("When It Rains") to gray-streaked, late night settings ("Slow Down") and most of the pictures are far from rosy.

Hilton understands that America is more than cornfields and beaches and she achieves greatness by reaching into dark corners and under-explored avenues. American Impressions presents rich slices of uncensored scenery filtered through the mind of a true original at the top of her game.