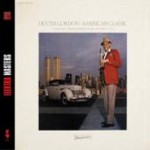 Reissued as part of the Warner Jazz Elektra Masters series, tenor saxophonist Dexter Gordon's American Classic was originally released in 1982. It was part of a late-period American renaissance enjoyed by Gordon, who, after 15 years in Europe, had made a much lauded return to the New York club scene in the mid 1970s. Gordon's renaissance took on even wider currency in 1986 with the release of Bertrand Tavernier's movie Round Midnight, in which Gordon took the star role, an amalgam of fellow boppers pianist Bud Powell and alto saxophonist Charlie Parker.

In truth, Gordon was playing himself on the screen, for like Powell and Parker he too had suffered extended bouts of alcohol and heroin addiction. His own experiences helped Gordon bring conviction to his role, but by the 1980s those same experiences had taken a cumulative toll on his own music. No longer the turbulent force of hard bop nature heard on Blue Note albums such as Doin' Alright (1961), Our Man In Paris (1963) and Getting' Around (1965), his playing was slowing up and his range was diminishing.

But that's to compare late period Gordon with his younger self. Even in the last decade of his life, Gordon (1923-1990) still had the power to make other players feel inadequate. He found that form on the closing two tunes on American Classic: his own, medium-fast blues "Sticky Wicket" and Johnny Mercer's and Hoagy Carmichael's gorgeous ballad, "Skylark." Accompanied by his regular band of the early 1980s—pianist Kirk Lightsey, bassist David Eubanks and drummer Steve Gadd—Gordon got tantalizingly close to his peak period muscle on "Sticky Wicket" and on the 12:39 "Skylark" turned in an extended solo of enthralling, rough-hewn lyricism.

The disc's opening three tracks are not so spectacular, and feature Gordon alongside organist Shirley Scott, who replaced Lightsey, and soprano saxophonist Grover Washington Jr., then on the crest of crossover success. Gordon could do soul jazz in his sleep, or at least nodding off, but at this stage in his career his heart no longer seemed to be in it. There's a frequent disconnect between tenor and organ, and Gordon's solos lack cohesion, being seemingly random sequences of non-motivic ideas, some of which work and some of which don't. "Sticky Wicket" has more soul than these three tracks rolled together.

The 2:02 minute interview tagged onto the end of the disc (it was on the original release too) is an opportunity to hear Gordon's voice, but don't expect any revelations: the questions are of the "Where do you find all your inspiration?" variety.