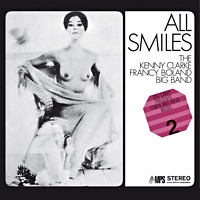 The Kenny Clarke-Francy Boland Big Band has historically been regarded as the best ensemble of its type based outside the US, and All Smiles is generally regarded as one of their finest recordings. You'll understand why with just a few listens.

Belgian pianist and arranger Francy Boland began making music with American expatriate Kenny "Klook" Clarke, the original drummer for The Modern Jazz Quartet, in 1961. The combination of their exquisite jazz sensibilities soon attracted first-call jazz musicians from both sides of the Atlantic, and they quickly stepped up to co-lead their erudite ensemble. Clarke, one of the original bebop drummers, was somewhat incredibly supported by a British drummer named Kenny Clare. "There are many who would like to get that springy kind of beat Klook gets," Clare once explained. "I would, too."

"Let's Face the Music and Dance" could not call out a better opener. It glides as elegantly as the Duke Ellington orchestra but with enough rhythmic punch (due in no small part to the tandem drums) to rumble through a Count Basie blues stomp—it's like living in the best of big-band worlds. Boland introduces "I'm Glad There is You" with a curious (almost Thelonious Monk-ish) table setting for Benny Bailey's flugelhorn solo, which he unfolds with Chet Baker's lush, cushiony ballad softness.

"By Strauss," the Gershwins' tribute to "The Waltz King," spotlights solos by Boland and tenor saxophonist Ronnie Scott. While Scott's tenor can sound a bit odd in this waltz, it serves to bridge the gap between waltz and jazz; Boland's solo sounds playful without playing around, and his bright dexterity rings out the sound of Bill Evans or a stylistic admirer like Vince Guaraldi. John Philip Sousa's "High School Cadets," a quick romp through a big-band march played by one of the best big bands around, ends with a curio piece.

"You Stepped Out of a Dream" would be my alternate title for this set, which seems to have risen like a dream from an earlier, somewhat more refined and less convoluted era. Listening to this musical snapshot is sure to leave you with nothing but All Smiles.

Let's Face the Music and Dance; I'm All Smiles; You Stepped Out of a Dream; I'm Glad There Is You; Get Out of Town; By Strauss; When Your Lover Has Gone; Gloria's Theme; Sweet & Lovely; High School Cadets.