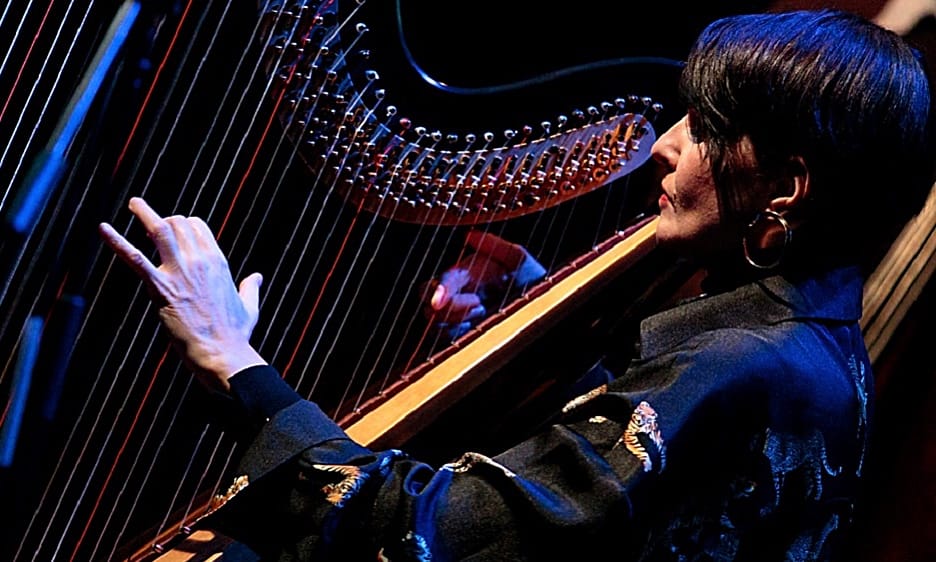 History owes Alice Coltrane much more than the moniker of "John Coltrane's wife." Alina Bzhezhinska makes the point early on to the Letterkenny audience, on this, the final night of her quartet's ten-date Irish tour. A fine, pianist, harpist composer and bandleader, Alice Coltrane was, Bzhezhinska says, a significant figure in her own right, not least for the forty or so albums that she recorded as leader before her death in 2007.

Following in the footsteps of trail-blazing harpist Dorothy Ashby, Alice Coltrane steered the harp into new realms, paving the way for modern harpists like Brandee Younger, Edmar Castaneda and, of course, Bzhezhinska. The London-based Ukrainian/Polish harpist previously paid homage to Alice Coltrane with the stellar Inspiration (Ubuntu Music, 2018), from which the guts of this evening's set is drawn.

A gorgeous, unaccompanied rendition of Alice Coltrane's "Wisdom Eye" opens proceedings -Bzhezhinska looping an ethereal swirling pattern that underscores her percussive strumming and sweeping glissandi. Then, from a pocket of near total silence, the harpist unleashes a dramatic riff like the crack of a whip, which spurs Larry Bartley on double bass and drummer Joel Prime into a mid-tempo groove. Tony Kofi's alto saxophone soars melodically, with Bzhezhinska adding splashes of color throughout.

Irresistible the catchy motif and Afro-Cuban rhythms of "Los Caballos," with Kofi charging on tenor saxophone—the bit firmly between the teeth. A drum feature, for all Prime's polyrhythmic swagger, rather halts the song's momentum—a bustling interlude before the quartet reunites on the head.

Bzhezhinska, like Alice Coltrane, pens a fine tune, and a brace of handsome originals underline her compositional flare. The achingly pretty ballad "Spero," an intimate duet with Kofi on soprano, bleeds into the dynamic "Annoying Semitones," whose brooding rhythms frame the leader's thrilling playing -far-reaching in emotional depth and timbral range.

Tunes by two of Alice Coltrane's most celebrated collaborators follow. From Bartley's extended bass improvisation, a propulsive ostinato emerges that signals Joe Henderson's "Fire"—an open-ended adventure featuring Kofi and Bzhezhinska. On McCoy Tyner's haunting "Contemplation," Prime shadows the music's ebbs and flows with brushes and then sticks, his playing passionate at one extreme, caressing at the other.

Bowed bass, rustling shells and gentle harp cascades open "Lemky," a striking Bzhezhinska composition dedicated to the Lemky ethnic group who populate Ukraine, Poland and Slovakia. War and forced resettlement, Bzhezhinska explains, have left abandoned villages dotted here and there. After the quartet's contemplative intro, however, the song's tone is upbeat and celebratory. Bow and shells reconvene on the song's outro, with Bzhezhinska evoking a ghostly wind by running a hand up and down the strings.

The standing ovation that ensues invites an encore of John Coltrane's "Afro Blue." It's perhaps a little ironic, given Bzhezhinska's earlier observation, that she should close out the concert with a tune by the more famous Coltrane. Then again, there's no escaping the enormous influence John had on Alice's music, or indeed on musicians everywhere these past sixty years.

It's Bzhezhinska's hope that her heartfelt proselytizing will introduce Alice Coltrane's music to a new audience. With performances as captivating as this one, so warmly received by the Letterkenny audience, there's every chance that Bzhezhinska will succeed in her mission to help elevate the sorely underrated talent that was Alice Coltrane.