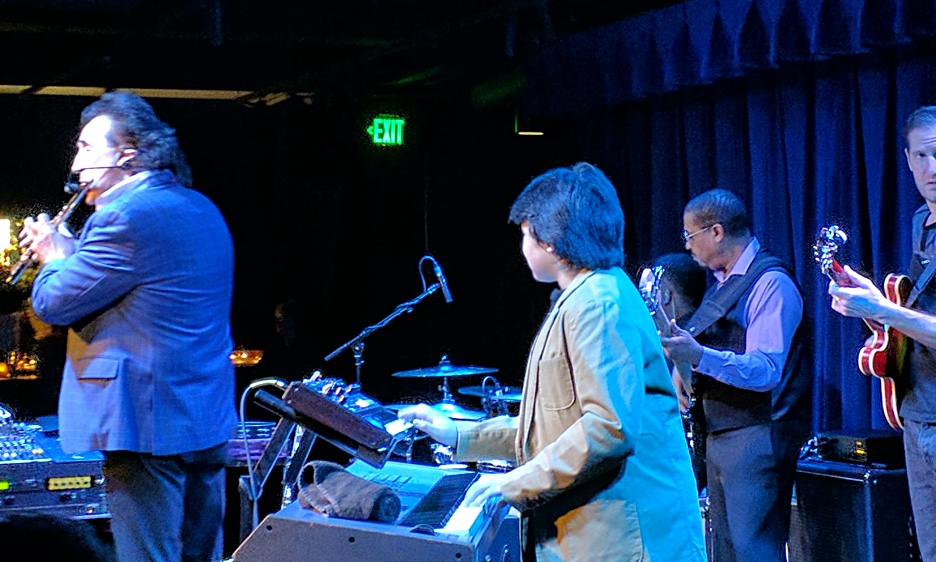 Flutist Alexander Zonjic was born in Canada, but has made his home in Detroit for many years. As he was tuning his guitar onstage he chatted with audience members from Windsor (there were several), and from Detroit (lots of those, too, including this writer). He recalled making his first trip to Charlotte in 1985 to play in Jonathan's Jazz Cellar (run by Middle C Jazz's director Jonathan Gellman). His band had all come down from Detroit, and he introduced them before starting the set. Keyboardist Justin Schultz is a 12 year old phenomenon, joined by drummer Jeff Canady, guitarist Kris Kurzawa, and electric bassist Mike Harrington. The club has recently installed a dance floor in preparation for a New Year's Eve salsa dance party: Zonjic offered free CDs to dancers, an offer which was soon accepted by a number of audience members.

The first tune was "AZ Does It," composed by keyboardist Jeff Lorber and saxophonist Kirk Whalum, from his album Seldom Blues (Heads Up, 2004). Zonjic is strongly associated with smooth jazz, but this was hot funk, not genteel background music. Zonjic has chops to burn, and a round of traded solos demonstrated that his band does, too, including drum and bass solos. "Doin' the D" is the title rock tune from the album Doin' The D (Heads Up, 2009). It began with a rubato flute/piano introduction—a pattern followed repeatedly during the show—and included the first of many holiday quotes, "God Bless You Merry, Gentlemen."

Zonjic is also a member of pianist/composer Bob James' band, and has often played "Angela" (the theme from the TV show Taxi). He mentioned James as an influence for keyboardist Schultz, and the band played it beautifully. "Sweat" is a catchy funk dance tune written by James Lloyd, the leader of the group Pieces of a Dream. It filled the dance floor so much that Zonjic had to ask for more CDs to be brought to the stage to give out to the dancers. It included an audience scream-along, first seated, then with hands up, and finally standing. Not only that, but two audience members announced that they actually got engaged on the dance floor! A first for Zonjic and this writer.

"Isabella" is an up-tempo Latin tune from Lorber, which included a quote from pianist Dave Brubeck's classic "Take Five." It was followed by another Latin tune which featured Zonjic on electric guitar (his first instrument). He traded off with Kurzawa, then they played harmonized lines together. The quotes kept on coming: bassist/composer Charles Mingus' "Goodbye Pork Pie Hat;" "The Little Drummer Boy;" and the 1972 Seals and Crofts hit "Summer Breeze." The show concluded with the title tune from flutist Herbie Mann's album Memphis Underground (Atlantic, 1969), a potent (and catchy) fusion of jazz and soul music. Zonjic took one final opportunity for seasonal quotes, touching on "Santa Claus Is Coming To Town," "Hark The Herald Angels Sing" and "Rudolph The Red-Nosed Reindeer."

Zonjic is an ebullient host. He and his band put on a great show, full of joy, energy, and formidable chops. And you can dance to it.