BY KARL ACKERMANN
February 13, 2018
Sign in to view read count 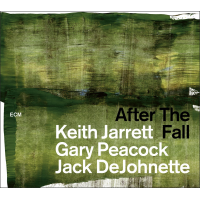 In the year between ECM releases Tokyo '96 (1997) and Whisper Not (1999), Keith Jarrett's iconic Standards Trio returned to live performances following a two-year break. Jarrett's bout with Chronic Fatigue Syndrome left him physically and emotionally drained, but with the condition in check, his expressive passion and physical enthusiasm return in full force with After The Fall.

The two-disc set was recorded at a concert in Newark, New Jersey in late 1998. If it appears that picking familiar selections from the Great American Songbook provided a comfortable re-entry for Jarrett, the fiery improvisations in this session indicate that the trio was ready for a convincing and hard-driving outing. Not many trios could turn "Santa Claus Is Coming To Town" into a bebop potboiler that sheds holiday trappings, early on.

Disc 1 opens with "The Masquerade Is Over" by Herb Magidson and Allie Wrubel. A tranquil introduction is ignited when Jack DeJohnette's accelerated pacing urges Jarrett into a more animated space. The trio doesn't come up for air until near the end of a fifteen-plus minute marathon. The general tone is set for a number of cookers, including John Coltrane's "Moment's Notice," Sonny Rollins' "Doxy" and Bud Powell's "Bouncin' With Bud." The trio offers a white-knuckled version of Charlie Parker's "Scrapple From The Apple" featuring an astounding interchange between DeJohnette and Jarrett. Gary Peacock shines on Pete La Roca's buoyant "One For Majid" and with his extended solo on "Autumn Leaves." The trio include two ballads with one of their staples, "When I Fall In Love," closing the collection.

The late ECM releases of Jarrett's 1996 solo collection A Multitude of Angels (2016) and After The Fall with DeJohnette and Peacock are tributes to the extraordinary resilience of the pianist. His pre-sabbatical and return are both marked by a relentless determination to perform with his impeccable and unique approach to improvisation. As for the Standards Trio, After The Fall is a reminder of why—and how—the now-defunct group redefined the piano trio. An excellent and highly recommended album.

CD 1: The Masquerade Is Over; Scrapple From the Apple; Old Folks; Autumn Leaves; Bouncin' with Bud. CD 2: Doxy; I'll See You Again; Late Lament; One for Majid; Santa Claus Is Coming to Town; Moment's Notice; When I Fall in Love.