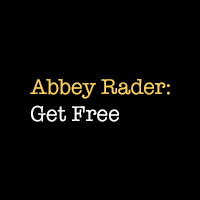 Drummer Abbey Rader is one of the most relentlessly explorative and idiosyncratic improvisers in jazz. He has a unique approach that stems from his rich and multifaceted experiences that has shaped his overall life outlook. So how can all this be told in only 20 minutes? Filmmaker J.L. Rubiera manages it poignantly and with elegant flair. His Abbey Rader: Get Free distills the essence of this singular artist in an impressively compelling third of an hour.

Shot in stunning and crisp black and white, this gripping court metrage packs the emotional energy and intellectual dynamism of Rader's percussion. Rubiera matches the cadence and the lighting of his film to stages of Rader's musical and spiritual development. For example, when Rader is taking a tour of his early haunts in New York; harsh, shadow-less light illuminates the snow covered urban scenery.

When he reminisces about his time in Europe the film is primarily made up soft focus still shots of the various prominent musicians with whom Rader played. During his recounting of his self-discovery the natural landscapes have an Ansel Adams-esque luminescence to them while the indoor scenes are shot with a mix of diffuse light and muted shadows.

Rader's intriguing and captivating music serves as the perfect soundtrack to the film. Its spontaneity parallels Rubiera's camerawork to make for a cohesive whole of sight and sound. Several snippets of live performances are carefully interspersed to enhance the ambience and underscore various key moments. Brief interviews with his collaborators; the saxophonists and clarinetists Noah Brandmark and John McMinn also pepper the narrative of Rader's metaphysical awakening and creative evolution.

This superb and thrilling short deftly sheds light on Rader and his brilliant virtuosity as well as his personal philosophy rooted in Buddhism. The movie also showcases Rubiera's own skills as a superlative documentarian and an accomplished director in his own right.